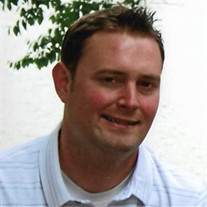 Adam Joseph McKean was born October 11, 1983, in Los Angeles, California, to Bernard Joseph and Patricia Melanie Byrd McKean. He died Friday, October 11, 2019, in Owasso, Oklahoma, at the age of 36 years. Adam completed his secondary education in Owasso and graduated with the Owasso High School Class of 2002. He had achieved the level of Black Belt in karate while in high school. He earned his bachelor’s degree from Oklahoma State University in Stillwater, Oklahoma, then his law degree from the University of Oklahoma, in Norman, Oklahoma. He served his country honorably with the United States Army Reserve, including service in Fallujah, Iraq. Adam worked as a lawyer and spent much of his working life as a land manager in the oil and gas industry. He was an avid fan of college football, especially the Oklahoma State Cowboys and Oklahoma Sooners. He enjoyed other pastimes including watching movies, reading and playing chess. Those he leaves behind who hold many cherished memories include: His father; Bernard McKean, Owasso Sister and brother-in-law; Amanda and Matt Turbett, of Moore, Oklahoma Brother; Alex McKean, of Broken Arrow, Oklahoma Two nephews; Joshua and Joseph Turbett As well as a host of aunts, uncles, cousins, and friends. He was preceded in death by his mother, Melanie McKean. Funeral service will be held 11:00 a.m. Saturday, October 26, 2019, at the Mowery Funeral Service Chapel in Owasso with Kelly Ward officiating. A private family disposition will be held at a later date. Arrangements and services were entrusted to Mowery Funeral Service of Owasso. www.moweryfs.com

The family of Adam Joseph McKean created this Life Tributes page to make it easy to share your memories.

Send flowers to the McKean family.