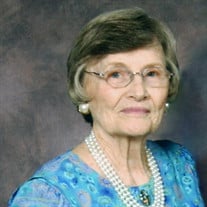 Alice Jane Hendricks was born February 24, 1927, in Milwaukee, Wisconsin, to Jake and Sarah Bierig Reisig. She died Tuesday, September 24, 2019, in Broken Arrow, Oklahoma, at the age of 92 years. Alice competed her secondary education in Okeene, Oklahoma, and graduated with the Okeene High School Class of 1945. She was married September 5, 1945, in Fairview, Oklahoma, to Jay Alden Hendricks. In 1953, she and Jay purchased a small farm just north of Owasso, Oklahoma, where they raised three children. They enjoyed living in Owasso and were longtime faithful members of the First United Methodist Church. Alice and Jay were also members of the Early Ford Club and had many fun times doing other activities they enjoyed with their family. Alice spent most of her working life as a homemaker caring for her family. After Jay’s retirement from American Airlines in 1981, he and Alice traveled extensively for many years in their motorhome all across the United States. Winters would usually be spent in McAllen, Texas, where they would do mission work in Progresso, Mexico. During the heat of the summer they would travel to the mountains of Colorado and drive their Jeep on the mountain trails. Welcomed into their lives while they traveled were five grandchildren and later as they settled back into the farmhouse they were presented with nine great-grandchildren. They loved and adored the time they spent with their family. Those she leaves behind who hold many cherished memories include: Her children; Tim Hendricks and wife Gloria, of Bixby, Oklahoma Mark Hendricks and wife Tammy, of Tulsa, Oklahoma Jennifer Laubach and husband Lee, of Okeene, Oklahoma Her grandchildren; Blake Hendricks Kara Duncan Sarah Parker and husband Jeremy Helena McLaurine and husband Andrew Marylee Plett Her great grandchildren; Ava Duncan, Jaclyn Duncan, Joel Hendricks, Dagen Hendricks, Faith Ann Parker, Emma Parker, Sophia Parker, Truman Parker, and Henry McLaurine Sister; Irene Nusz, of El Reno, Oklahoma She was preceded in death by her parents, her husband Jay, brother, Victor Reisig, and two sisters, Shirley Schwartz and Helen Greb. Visitation will be held from 2:00 p.m. to 4:00 p.m. Sunday, September 29, 2019, at Mowery Funeral Service in Owasso. Graveside service will be held 1:30 p.m. Monday, September 30, 2019, at Homestead Cemetery near Okeene, Oklahoma with Pastor Jeremy Parker officiating. Serving as casket bearers will be Tim Hendricks, Mark Hendricks, Blake Hendricks, Eddie Beers, Gene Greb, and Andrew McLaurine. Memorial service will be held 11:00 a.m. Friday, October 4, 2019, at the First United Methodist Church in Owasso with Pastor Jim Cinocca officiating. The family requests memorial contributions be made in memory of Alice Hendricks to the First United Methodist Church of Owasso, 13800 East 106th Street North, Owasso, Oklahoma, 74055. Arrangements and services were entrusted to Mowery Funeral Service of Owasso. www.moweryfs.com

The family of Alice Jane Hendricks created this Life Tributes page to make it easy to share your memories.

Send flowers to the Hendricks family.