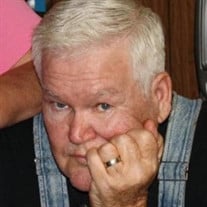 Allen Clayton Cash was born September 19, 1935, in Hoffman, Oklahoma, to Wilbur Lee and Mae Elizabeth Howell Cash. He died Friday, April 17, 2020, in Collinsville, Oklahoma, at the age of 84 years. Allen completed his secondary education then served his country honorably with the United States Navy in the submarine service. He was married December 28, 1961, in Collinsville to Joyce Kaemper. They have made their home in Collinsville since that time. Allen began his working career with McDonnell Douglas Aircraft in Tulsa as an assembler. He then spent over 32 years as a radiology supervisor with Yuba Heat Transfer. He was a member and past chairman of the American Society for Nondestructive Testing. He was a longtime member of the Church of Christ. Allen enjoyed a variety of pastimes, especially being outside and working in the yard. He was a big socializer and loved talking with his friends and family. He particularly enjoyed spending time with his grandchildren and great grandchildren. Those he leaves behind who hold many cherished memories include: His wife of over 58 years; Joyce, of the home Children; Bruce Cash and wife Toni, of Collinsville Brook Cash and Lora, of Little Rock, Arkansas Shelley Wray and husband Samuel, of Skiatook, Oklahoma Shannon Cash, of Victoria, Texas Grandchildren; Deanna Ackerman and husband Levi Kelsie Miller and husband Justin Brady Denton, Alexis Wray, and Brooklyn Wray Great grandchildren; Cannon Miller, Chevy Miller, Zoey Ackerman, and Heath Ackerman Sisters; Shirley Watson and Frances Jolliff, of Oklahoma He was preceded in death by his parents, sister, Sue, and brothers, Kenneth, David, Sam, and Dan. Due to the current regulation regarding public gatherings, a funeral service will be scheduled at a later date. Arrangements and services were entrusted to Mowery Funeral Service of Owasso. www.moweryfs.com

The family of Allen Clayton Cash created this Life Tributes page to make it easy to share your memories.

Send flowers to the Cash family.