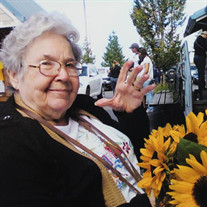 Angie Ella (Reed) Williams passed away on Thursday March 29th, at her home in Dupont, Washington in the company of loved ones and her favorite Big Band music. Angie was born in DeQueen Arkansas on November 22, 1922 to William Houston Reed and Vivian Posey Reed. She was the oldest of four children and a graduate of Hinton High School. It was in Hinton, OK where she met her husband of 69 years, WJ “Red” Williams, with whom she had three sons: Britton, Roger, and Jeffrey. After Red’s return home from WWII, they travelled the country with Amis Construction before returning to Oklahoma and settling in Owasso to finish raising their young family. In Owasso, she loved going to church, and supporting Owasso High School where both her older boys played ball and graduated. They later moved to Edmond, OK where Angie embarked on a new adventure to finally pursue her lifelong goal of attending college and becoming a nurse. She worked at Mercy Health Center in Oklahoma City for 18 years and loved being a nurse and working with the nuns. She enjoyed many great friendships and was a member of the hospital bowling team. Her greatest joy in life though, was her family. In the summers she could be found at their cabin at Oologah Lake swimming, boating, and playing card games with her grandchildren. She also loved travelling with grandkids, in their motorhome and attending family reunions. In retirement, Angie and Red moved closer to Tulsa to be near their sons, where they delighted in visits from a whole new generation of babies-their many great grandchildren! They could also often be seen sitting on the porch with their dog, watching the squirrels and enjoying the sunshine. Angie also enjoyed reading books, visiting antique shops, and playing dominoes. Angie, also known as “Ann” and later as “Nanny” was a feisty 4’11” and loved babies, dogs, and gospel music. She was a devoted wife and a hard working woman who fiercely loved her family. She is preceded in death by her husband WJ “Red” Williams, her youngest son Jeffrey Owen Williams, her daughter-in law Stacey Williams, and her grandson Chris Williams. She is survived by her sons and daughters-in-law Britt and Sharon Williams, and Roger and Donna Williams; grandchildren John Williams, Jennifer Kuykendall-Mize, Melissa Williams Hartley, David Williams, Joey Williams, and Kevin Williams; and numerous great grandchildren. Funeral service will be held 1:00 p.m., Saturday, April 14, 2018, at Mowery Funeral Service Chapel in Owasso with Pastor Joe Goodin Officiating. Interment will follow at Fairview Cemetery in Owasso, Oklahoma. Arrangements and services were entrusted to Mowery Funeral Service of Owasso.www.moweryfs.com

Angie Ella (Reed) Williams passed away on Thursday March 29th, at her home in Dupont, Washington in the company of loved ones and her favorite Big Band music. Angie was born in DeQueen Arkansas on November 22, 1922 to William Houston Reed and... View Obituary & Service Information

The family of Angie E. "Ann" Williams created this Life Tributes page to make it easy to share your memories.

Send flowers to the Williams family.