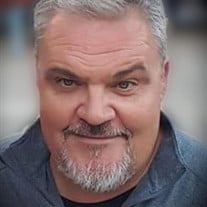 Barry Allen Autry was born December 3, 1969, in Jackson, Tennessee, to James Allen and Dorothy Jean Dunning Autry. He died Tuesday, January 14, 2020, in Owasso, Oklahoma, at the age of 50 years. Barry was reared and educated in Jackson, Tennessee, where he graduated with the Gibson County High School of 1988. He continued his education attending Union University in Jackson. Barry was married November 14, 1998, in Jackson to Melissa “Missy” Renfroe. He spent much of his working life in sales and was currently the district sales manager for Bodyarmor Sports Drinks in Tulsa. While living in Tennessee, he was a member of Beacon Baptist Church in Parsons. His sales experience took moved him from Tennessee, to Louisiana, Mississippi, Florida, and then in 2014 to Owasso. At that time, he and Missy became faithful members of First Baptist Church of Owasso. Barry enjoyed a wide variety of pastimes including spending time hunting and fishing. Other interests included watching sports, especially football, and being an avid Marvel characters fan. Most important to him was his family whom he dearly loved. Those he leaves behind who hold many cherished memories include: His wife; Missy Children; Stone Autry and Presley Autry, all of the home Brother and sister-in-law; Brad and Tracy Autry, of Medina, Tennessee He was preceded in death by his parents, and a son, Alexander Autry. Funeral service will be held 10:00 a.m. Friday, January 17, 2020, at First Baptist Church of Owasso with Pastor Chris Wall officiating. The family requests memorial contribution s be made in Barry’s name at https://www.gofundme.com/f/swwzap-barry-autry-memorial-fund?utm_source=customer&utm_medium=copy_link-tip&utm_campaign=p_cp+share-sheet. A funeral will be held next week at Beacon Baptist Church in Parsons, Tennessee. Arrangements and services were entrusted to Mowery Funeral Service of Owasso. www.moweryfs.com

The family of Barry Allen Autry created this Life Tributes page to make it easy to share your memories.

Send flowers to the Autry family.