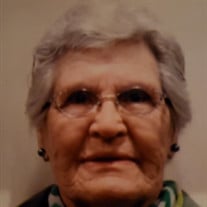 Betty Jewell Carver was born December 29, 1924, in Hallet, Oklahoma, to Edward David and Lena Estell Burton Blackburn. She died Tuesday, September 29, 2020, in Owasso, Oklahoma, at the age of 95 years. Betty was reared and educated in Hallet, Oklahoma, and was a graduate of Hallet High School. She was married June 21, 1947, in Tulsa, Oklahoma, to William Charles “Bill” Carver. They had made their home in Owasso, Oklahoma, since 1967. She spent most of her working life as a homemaker and caring for her family. She was a longtime faithful member of First Church, Owasso, formerly First Christian Church. Betty worked diligently with Meals on Wheels for over 22 years. She was also committed to donating blood and helping others. She and Bill enjoyed going camping at Sequoyah State Park. She was an avid gardener and enjoyed raising produce. Betty was also an avid sports fan and enjoyed listening to Owasso Ram sports. She was especially fond of her role of “MarMar” to her grandkids. Those she leaves behind who hold many cherished memories include: Her children; Sandy Carver, of Tulsa, Oklahoma Barbara Yarger, of Skiatook, Oklahoma Jana Olds and husband Rick, of Skiatook, Oklahoma Chuck Carver, of Owasso, Oklahoma Grandchildren; Jeff Yarger and wife Jennifer, of Phoenix, Arizona Brian Yarger and wife Nichole, of Phoenix, Arizona Nicole Webb, of Wagoner, Oklahoma Nine great grandchildren One great great grandchild Brother; David Blackburn, of Sand Springs, Oklahoma She was preceded in death by her parents, her husband, Bill Carver, two brothers, Gene Blackburn, and Billy Blackburn, and one sister, Bonnie Melton. Funeral service will be held 10:30 a.m. Monday, October 5, 2020, at the Mowery Funeral Service Chapel in Owasso with Pastor Ben Killion officiating. Final resting place will be at Chelsea Cemetery in Chelsea, Oklahoma. The family requests memorial contributions be made in Betty’s name to First Church, 10100 North Garnett Road, Owasso, Oklahoma, 74055. Arrangements and services were entrusted to Mowery Funeral Service of Owasso. www.moweryfs.com

Betty Jewell Carver was born December 29, 1924, in Hallet, Oklahoma, to Edward David and Lena Estell Burton Blackburn. She died Tuesday, September 29, 2020, in Owasso, Oklahoma, at the age of 95 years. Betty was reared and educated in Hallet,... View Obituary & Service Information

The family of Betty Jewell Carver created this Life Tributes page to make it easy to share your memories.

Send flowers to the Carver family.