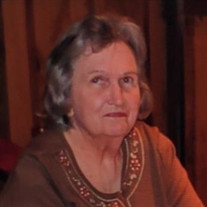 Betty Lou (Ware) Robertson was born September 3, 1937, in Worcester, Massachusetts, to James Milton Ware and Madeline Frances (Dodge) Ware. She went to be with the Lord on Sunday, January 23, 2022, in Owasso, Oklahoma. Betty Lou was raised in Worcester where she graduated from Classical High School in 1955. She went on to Wheelock College where she received a bachelor’s degree in Education. After college, she began her career in education by teaching kindergarten. Her love for children and caring for them continued until she retired from the Ava Maria Child Development Center at St. Francis Hospital. On September 22, 1962, Betty Lou married Donald Francis Robertson at First Congregational Church in Worcester. She had had a crush on him since she was twelve years old. They were married for 55 years before Donald passed away in 2018. Betty Lou had a smile for anyone who came across her path. She had a quick wit about her and was easy going. She was dedicated to her husband and children. She shared her love of reading with both of her daughters. Betty Lou had a green thumb and loved to care for her plants. One time she planted a poinsettia (she received at Christmas) outside and was able to keep it alive for many years. She had a servant’s heart and would step up to help people in need. She was active for many years at Ascension Lutheran Church in Tulsa, OK where she was involved in the Women’s Group and the Altar Guild. On Friday nights, Betty Lou enjoyed bowling with her husband. Those she leaves behind that will miss her dearly include her son, Donald F. Robertson Jr., of Newalla, Oklahoma, her daughters, Wendy J. Dallenbach and husband Todd, of Owasso, Oklahoma, and Marsha D. Bridges and husband Ken, of Odessa, Texas; eight grandchildren; one great-grandchild; and a brother-in-law Robert Robertson of Leicester, Massachusetts. She was preceded in death by her parents, her husband, Donald, two brothers, Donald Ware and Philip Ware, and a sister Barbara Ann Holmes. Visitation will be held from 6:00 p.m. to 8:00 p.m. Thursday, January 27, 2022, at the Mowery Funeral Service Chapel in Owasso. Private burial at Fort Gibson National Cemetery in Fort Gibson, Oklahoma, will take place on Friday, January 28, 2022. In lieu of flowers the family requests memorial donations be made in Betty Lou’s memory to Alzheimer’s Association, P.O. Box 96011, Washington D.C., 20090. Arrangements and services were entrusted to Mowery Funeral Service of Owasso. www.moweryfs.com

Betty Lou (Ware) Robertson was born September 3, 1937, in Worcester, Massachusetts, to James Milton Ware and Madeline Frances (Dodge) Ware. She went to be with the Lord on Sunday, January 23, 2022, in Owasso, Oklahoma. Betty Lou was raised... View Obituary & Service Information

The family of Betty Lou Robertson created this Life Tributes page to make it easy to share your memories.

Send flowers to the Robertson family.