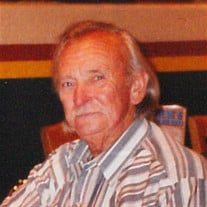 Billy Moore was born September 19, 1942, in Tulsa, Oklahoma. He died Monday, December 10, 2018, in Oklahoma City, Oklahoma, at the age of 76 years. Known by most of his friends as Bill, he never met a stranger. He spent most of his working life in the construction industry as a roofer. Bill loved everyone and was a dedicated prayer warrior. He was a faithful member of Faith Church in Oklahoma City. He had a great love for his pastors, Terry Bates, Theodore Hughes, and Doug Muchow. He had a deep respect for those who serve in the United States military, especially those in the United States Air Force. Bill was a model collector and builder of vintage cars and planes. He enjoyed spending time with his grandsons building models together. He also enjoyed traveling, especially to Colorado to go hiking and just take in the outdoors. He will be greatly missed by his family, his friends, and his church family. Those he leaves behind who hold many cherished memories include: His wife of over 23 years; Lena, of the home Son; Jeff Moore of Denver, Colorado Two daughters; Jennifer Yates and Kelli Holmes, both of Valencia, California Six grandchildren; Mary, Stephanie, Christina, John, Jr., David, and Katie Four great grandchildren; Carter, Lilian, Daxton, and Bodhi Sister; Clara Carson, of Collinsville, Oklahoma Through his marriage to Lena, he also gained a daughter, Leticia Barrios, and a son, Bennett Barrios, along with four more grandchildren, Eliana, Edrin, Emmanuel, and Isaiah. He was preceded in death by his parents, one brother, Richard Stout, and two sisters, Geraldine Moore, and Margaret Hill. Visitation will be held from 4:00 p.m. to 8:00 p.m. Thursday, December 13, 2018, at Mowery Funeral Service in Owasso, Oklahoma. Graveside service will be held 11:00 a.m. Friday, December 14, 2018, at Sandridge Cemetery in rural Owasso with Pastor Theodore Hughes officiating. Arrangements and services were entrusted to Mowery Funeral Service of Owasso. www.moweryfs.com

Billy Moore was born September 19, 1942, in Tulsa, Oklahoma. He died Monday, December 10, 2018, in Oklahoma City, Oklahoma, at the age of 76 years. Known by most of his friends as Bill, he never met a stranger. He spent most of his working... View Obituary & Service Information

The family of Billie Lee Moore created this Life Tributes page to make it easy to share your memories.

Send flowers to the Moore family.