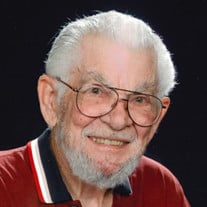 Billy Don Clevenger was born on August 19, 1935 in Enid, Oklahoma to Eugene Clevenger and Ruby (Thiessen) Clevenger. He died on Wednesday, February 24, 2021 in Tulsa, Oklahoma at the age of 85 years. Billy was raised and educated around the Tulsa area and graduated with the Central High School Class of 1953. After high school he enlisted and served his country honorably in the United States Air Force. He then went on to earn his A&P Certificate from Spartan School of Aeronautics. Shortly after graduation, Billy was married on June 27, 1959 in Sedan, Kansas to Eula “Sharon” (Barham) Clevenger. He spent most of his working life as an aircraft mechanic with Continental Airlines in Tulsa for over 30 years. Billy was a founder of the Tulsa Bow Hunters Association. He was also a faithful member of First Baptist Church in Collinsville, Oklahoma for many years. In his spare time, Billy enjoyed rebuilding old cars, bow fishing, and spending time with Sharon. Those he leaves behind who hold many cherished memories include: 2 Children; Troy Clevenger and wife Julie Greg Clevenger and wife Michelle 3 Grandchildren; Jennifer Wellman and husband Doug Angela Cobb and husband Dave Amanda McHughes and husband Logan 5 Great Grandchildren; Brooklyn, Alex, Natalie, Adalynn, and Henry He was preceded in death by his parents, Eugene and Ruby, wife, Sharon, 2 brothers, David and Lonnie, and 2 sisters, Dixie, and Thelma. Visitation will be held from 4:00 p.m. to 8:00 p.m. on Wednesday, March 3, 2021 at Mowery Funeral Service in Owasso. Memorial service will be held 10:30 a.m. on Thursday, March 4, 2021 at Collinsville First Baptist Church with Pastor Tim Prock officiating. In lieu of flowers, the family requests donations be made in Billy’s memory to the Owasso Gospel Opry, P.O. Box 2171, Owasso, OK 74055.

Billy Don Clevenger was born on August 19, 1935 in Enid, Oklahoma to Eugene Clevenger and Ruby (Thiessen) Clevenger. He died on Wednesday, February 24, 2021 in Tulsa, Oklahoma at the age of 85 years. Billy was raised and educated around the... View Obituary & Service Information

The family of Billy Don Clevenger created this Life Tributes page to make it easy to share your memories.

Send flowers to the Clevenger family.