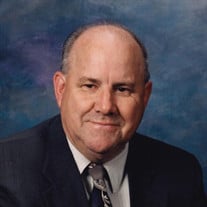 Billy David Farley was born October 19, 1934, in Siloam Springs, Arkansas, to Jesse John and Grace Lorene Daniels Farley. He died Friday, December 11, 2020, in Owasso, Oklahoma, at the age of 86 years. Bill was reared and educated in Siloam Springs, Arkansas, and graduated with the Siloam Springs High School Class of 1952. He was married December 6, 1953, in Siloam Springs to “Cyd” Leda Belle Harrison. Bill and Cyd had made their home in Owasso, Oklahoma, in 1962. He started Standard Auto Supply as co-owner and spent over 50 years in the automotive business. . He was a member of Automotive Wholesalers of Oklahoma. Bill was a Christian man strong in his faith and was a member of Christ’s Church of Owasso. He was a hard worker but enjoyed time spent gardening, fishing, and traveling. Those he leaves behind who hold many cherished memories include: His wife of over 67 years; Cyd, of the home Children; Steve Farley and wife Emily, of Siloam Springs, Arkansas Cyndee Hurt and husband Dewayne, of The Woodlands, Texas Grandchildren; Jamie McCotter and husband Patrick, of Sperry, Oklahoma Joey Hurt and wife Meagan, of Rogers, Arkansas Brianna Lewis and husband Curtis, of Willis, Texas David Farley and wife Jesyka, of Siloam Springs, Arkansas Chris Farley and wife Pam, of Collinsville, Oklahoma 13 Great Grandchildren And a host of other relatives and friends. He was preceded in death by his parents, brothers, Vern Farley, Jack Farley, and Bob Farley, and one sister, Iris Dean Dill. Visitation will be held from 4:00 p.m. to 8:00 p.m. Tuesday, December 15, 2020, at Mowery Funeral Service in Owasso. Funeral service will be held 11:00 a.m. Wednesday, December 16, 2020, at the Mowery Funeral Service Chapel with Pastor David Payne officiating. Committal service and interment will follow at Graceland Memorial Park Cemetery in Owasso. Arrangements and services were entrusted to Mowery Funeral Service of Owasso. www.moweryfs.com

The family of Billy David Farley created this Life Tributes page to make it easy to share your memories.

Send flowers to the Farley family.