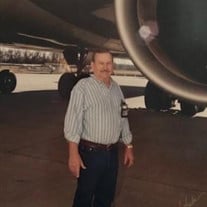 Billy Fred Howard was born February 24, 1933, in Ratliff, Arkansas, to William Kenneth and Nora Mae Matthews Howard. He died Thursday, September 3, 2020, in Owasso, Oklahoma, at the age of 87 years. Billy was reared and educated in Ozark, Arkansas, and graduated with the Ozark High School Class of 1951. He was a veteran of the armed forces having served his country honorably with the United States Navy. He spent over 38 years with American Airlines in Tulsa as a crew chief before his retirement in 1995. He was a member of the Transport Workers Union Local #514. Billy enjoyed a variety of pastimes, especially working in his yard and spending time gardening. He was an avid fan of the Oklahoma City Thunder. He was particularly fond of his role as “Grandpa” to his grandchildren. Those he leaves behind who hold many cherished memories include: Spouse; Ralph “Douglas” Keen, of Owasso, Oklahoma Children; Tammy Higeons and husband Rick, of Nowata, Oklahoma David Howard, of Oklahoma City, Oklahoma Trina Gange and husband John, of Broken Arrow, Oklahoma Robert D. Tompkins, of Claremore, Oklahoma Grandchildren; Amanda Moss, Bradley Gange, Amber Higeons, Marci Tompkins, and Shawn Tompkins Great grandchildren; Kyra Turner and Braden Morrison Sister; Shirley Wells and husband Tom, of Ozark, Arkansas Two brothers; Bobby Howard and wife Judy, of Ozark, Arkansas Dale Howard and wife Joyce, of Rockwall, Texas And a host of other relatives and friends. He was preceded in death by his parents, and two brothers, Jerry Don Howard, and Clifford Howard. Visitation will be held from 1:00 p.m. to 5:00 p.m. Wednesday, September 9, 2020, at Mowery Funeral Service. Final resting place will be at Floral Haven Memorial Gardens in Broken Arrow, Oklahoma. The family requests memorial contributions be made to the American Pancreatic Association, 2508 West 71st Street, Prairie Village, Kansas, 66208. Arrangements and services were entrusted to Mowery Funeral Service of Owasso. www.moweryfs.com

Billy Fred Howard was born February 24, 1933, in Ratliff, Arkansas, to William Kenneth and Nora Mae Matthews Howard. He died Thursday, September 3, 2020, in Owasso, Oklahoma, at the age of 87 years. Billy was reared and educated in Ozark,... View Obituary & Service Information

The family of Billy Fred Howard created this Life Tributes page to make it easy to share your memories.

Send flowers to the Howard family.