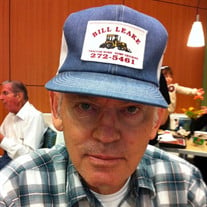 Billy Wayne Leake was born November 30, 1937, in Ketchum, Oklahoma, to William I. and Dona Kate Roberts Leake. He died Sunday, December 15, 2019, in Claremore, Oklahoma, at the age of 82 years. At a young age, Billy left home to work on a dairy farm. After graduating from high school at White Oak, Oklahoma, he went to Wyoming where he worked with his brothers in construction. He later worked with his brother-in-law and sister on their farm in Illinois. Billy was married December 5, 1959, in Kankakee, Illinois, to Billie Ruth Caraker. Shortly after he was drafted into the United States Army during which time he served his country honorably. After his discharge, he went to work for General Foods in Kankakee. He left General Foods and moved to Tulsa, Oklahoma, in 1971, where he became a superintendent at his brother Charlie’s construction company. After working several years with his brother, he then started his own construction company in Owasso, Bill Leake Construction. He was a member of the American Legion and the Homebuilders Association. Bill enjoyed a variety of pastimes including woodworking, hunting, and fishing. He particularly enjoyed drinking coffee with his friends at McDonalds, also known as “Spit and Whittle Club”. Those he leaves behind who hold many cherished memories include: Two sons; David Leake, of Owasso Darryl Leake and wife Jody, of Owasso Brothers; Irvin Leake, of Big Cabin, Oklahoma Jerry Leake, of Inola, Oklahoma Donald Leake and wife Adele, of Catoosa, Oklahoma Charles Leake, of Tulsa, Oklahoma Sister; Faye Baker, of Riverside, California He was preceded in death by his parents, his wife, Billie Leake, four brothers, Leroy Leake, George Leake, Walter Leake, and Arthur Leake, and three sisters, Ella Kuhar, Lola Inglehart, and Maxine Cly. Visitation will be held from 4:00 p.m. to 8:00 p.m. Thursday, December 19, 2019, at Mowery Funeral Service in Owasso. Funeral service will be held 11:00 a.m. Friday, December 20, 2019, at the Mowery Funeral Service Chapel in Owasso with Pastor Leonard Pirtle officiating. Committal service and interment will follow at Floral Have Memorial Gardens in Broken Arrow, Oklahoma. Arrangements and services were entrusted to Mowery Funeral Service of Owasso. www.moweryfs.com

Billy Wayne Leake was born November 30, 1937, in Ketchum, Oklahoma, to William I. and Dona Kate Roberts Leake. He died Sunday, December 15, 2019, in Claremore, Oklahoma, at the age of 82 years. At a young age, Billy left home to work on a... View Obituary & Service Information

The family of Billy Wayne Leake created this Life Tributes page to make it easy to share your memories.

Send flowers to the Leake family.