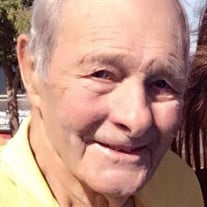 Bobby Gene Puckett was born February 12, 1936, in Keota, Oklahoma, to Curtis and Agnes Puckett. He died Wednesday, September 18, 2019, in Owasso, Oklahoma, at the age of 83 years. Bob was married April 30, 1955, in Tulsa, Oklahoma, to Barbara Jane Cole. They had made their home in Owasso since 1968. He began at Tulsair in an entry level position on February 2, 1956. He quickly worked his way through the ranks becoming a pilot and retiring on February 2, 2001, as Vice President. He enjoyed a variety of pastimes including airplanes, riding motorcycles and stock car racing. He was affectionately known as “Papa Puckett” to his grandchildren. Those he leaves behind who hold many cherished memories include: Daughter and son-in-law; Sonya and Rick DeArmond, of Owasso, Oklahoma Son and daughter-in-law; Bobby, Jr., and Cathy Puckett, of Collinsville, Oklahoma Grandchildren; Brandon Brooks, of Collinsville, Oklahoma Tanea Brooks, of Orlando, Florida Joshua Bivins, of Houston, Texas Mason DeArmond, of Owasso, Oklahoma Great-Grandchildren; Cole Brooks, Lily Bivins, Ruby Bivins, Landon Turner, Silas Bivins and Ian Aguilar. Two Nephews; Craig Puckett and Curt Puckett. He was preceded in death by his parents, his wife, Barbara, one grandson, Silas Bivens, one brother and three sisters. Funeral service will be held 1:00 p.m. Tuesday, September 24, 2019, at the Mowery Funeral Service Chapel in Owasso with Pastor Jimmy Ray officiating. Committal service and interment will follow at Ridgelawn Cemetery in Collinsville, Oklahoma. Arrangements and services were entrusted to Mowery Funeral Service of Owasso. www.moweryfs.com

The family of Bobby Gene Puckett created this Life Tributes page to make it easy to share your memories.

Send flowers to the Puckett family.