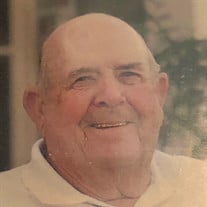 Bobby “Papaw” Dwain Shahan was born on January 29, 1933 in Mounds, Oklahoma to Jess Shahan and Bessie Mae (Ketchum). He passed from this life on Sunday, November 15, 2020 in Tulsa Oklahoma at the age of 87 years. Bobby was raised in Okmulgee where he attended Okmulgee Schools. After school he enlisted and served his country honorably in the United States Army in Korea. Bobby was married on December 3, 1982 in Clarksville, Arkansas to Marjory Turpen-Shahan. Marjory passed from this life on April 2, 2012. Bobby remarried on August 15, 2015 in Locust Grove, Oklahoma to Jacqueline (Jacobson) Shahan. He worked as a truck driver and a Chief Mechanic with Hamilton trucking in Tulsa for over 10 years and then worked as a technician with Ramey Testing Lab in Owasso, Oklahoma for almost 10 years. Bobby spent a considerable part of his working life as a Warehouse Advisor with Turpen & Associates in Tulsa for over 25 years. In his spare time, he enjoyed playing golf, fishing, feeding deer, decorating for the 4th of July and Christmas, but most of all he loved spending time with his family and irritating his grandkids and co-workers. As a result, he was affectionately known as Precious, Grumpy, Old Hickory Nuts, Bob Robert and many others best left unsaid. We will all miss his favorite salutation “How you are?” Those he leaves behind who hold many cherished memories include: His Wife; Jacqueline Shahan Daughter; Barbara Townsend and husband Bill Stepsons; Mike Turpen and wife Susan Frosty Turpen and wife Gayla Mary Lou Turpen, daughter-in=law 12 Grandchildren; Kendal, Kelli, Matthew, Sean, Patrick, Sarah, Julie, John, Josh, Shannon, April, and Jamie 14 Great Grandchildren Sister; Peggy Ball He was preceded in death by his parents, Jess and Bessie, stepdad Everett Jones, Wife Marjory, stepson Brent and son, Gary. Visitation will be from 2:00 p.m. to 8:00 p.m. on Thursday, November 19, 2020 at Mowery Funeral Service in Owasso. A family graveside service will be held on a later date at Fort Gibson National Cemetery.

The family of Bobby Dwain "Papaw" Shahan created this Life Tributes page to make it easy to share your memories.

Send flowers to the Shahan family.