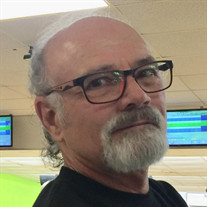 Brad Theis was born July 5, 1956, in San Jose, California. He died Saturday, September 7, 2019, in Tulsa, Oklahoma, at the age of 63 years. Brad completed his secondary education in Clinton, Oklahoma, where he was graduated with the Clinton High School Class of 1974. He was a veteran of the armed forces having served his country honorably with the United States Army and the National Guard. He later returned to the Tulsa and Owasso area where he began a longstanding career with the Murray Womble Company as a field technician. Brad was married to the love of his life, Tanya Brewster on June 21, 2011, in Oologah, Oklahoma. They enjoyed a variety of activities together, especially RVing, traveling and camping. He also enjoyed taking his family boating and going out on the lake. Brad was a big fan and spent many years as an active bowler at Sheridan Lanes in Tulsa with the Rockwell League. He and Tanya had taken an exciting trip with the RV over the summer to Las Vegas to participate in the USBC Bowlers Tournament. Brad also enjoyed spending time riding his motorcycle and was an avid collector of Harley Davidson memorabilia. Those he leaves behind who hold many cherished memories include: His wife; Tanya, of the home Children; Vidisha Newton and husband Aaron, of Owasso, Oklahoma Govind Raj and wife Veronica, of Oologah, Oklahoma Chad Theis and wife Amanda, of Panhandle, Texas Brandy Neil and husband, of Panhandle, Texas Grandchildren; Katherine Newton, Allie Theis, Michael Theis, Ethan Neil, Carter Neil, and Cooper Neil Brother-in-law; Rick Kilmer, of Owasso, Oklahoma Brother; Kenneth Lee Theis, Jr., of Salina, Kansas He was preceded in death by his parents, Kenneth Lee Thies and Betty Jean McGlasson Theis, one brother, Brian Bartholdi, and one sister, Stacey Kilmer. A Celebration of Brad’s Life will be held 11:00 Saturday, September 21, 2019, at the Hawthorn Bluff Campground at Oologah Lake where friends can share stories. Arrangements have been entrusted to Mowery Funeral Service of Owasso. www.moweryfs.com

Brad Theis was born July 5, 1956, in San Jose, California. He died Saturday, September 7, 2019, in Tulsa, Oklahoma, at the age of 63 years. Brad completed his secondary education in Clinton, Oklahoma, where he was graduated with the Clinton... View Obituary & Service Information

The family of Bradley James Theis created this Life Tributes page to make it easy to share your memories.

Send flowers to the Theis family.