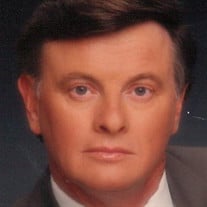 Buford James “Tim” Tyler was born November 6, 1946, in Trenton, Michigan, to Buford James and Dorothy Naomi Wakely Tyler. He passed away Wednesday, October 16, 2019, in Owasso, Oklahoma, at the age of 72 years. Tim completed his secondary education in Sand Springs, Oklahoma, and graduated with the Charles Page High School Class of 1964. He earned his Associate Degree in Computer Science at Northeastern Oklahoma A & M, in Miami, Oklahoma. He continued his education at the University of Oklahoma, in Norman, Oklahoma, where he earned his Bachelor of Business Administration and Management in 1972. In 1992, he completed his Master of Science in Aerospace Science at Oklahoma State University in Tulsa, Oklahoma. Tim was a veteran of the armed forces having served his country honorably with the United States Army as a radar instructor. Tim was very proficient in his career as an aerospace manager and FAA DAR. His work began with American Airlines in Tulsa, but later took him around the world. He began his own consulting business in 2003, Plane Cents Consultants in Owasso, which allowed him to use his skills to perform inspections on single engine land aircraft and reciprocating engine helicopters. He specialized in analyzing operations and implementing operations. He was experienced in authoring Maintenance General Procedures Manual and other relevant documentation and manuals to ensure FAA compliance. Tim was able to speak Brazilian Portuguese conversationally and studied Beijing Dialect Chinese. He was a past board member of the Tulsa Air and Space Museum. He had served as an Adjunct Professor with Tulsa Community College instructing the History of Aviation. He held a private pilot (fixed wing) rating and a pilot (rotor wing) rating. He also owned and flew a Hiller UH-12C helicopter. Those he leaves behind who hold many cherished memories include: His wife; Patricia , of 20 years Children; James “Rocke” Tyler and wife Erin, of Oklahoma City, Oklahoma Mike Tyler and wife Jennifer, of Colorado Springs, Colorado Stepchildren; Wendy May and husband Jeff, of Merced, California Dawn Howa and husband Curtis, of Draper, Utah Shannon Moebius and husband Tom, of Orange, California Christy Rush, of Cheltham, England Grandchildren; Jackson, Shannon, Eiley, Julianne and husband Jake, Andrea, Caroline, Matthew, Mackenzie, Carter, Preston, Ryan, and Casey Brother; Allen Tyler and wife Sherry, of Sapulpa, Oklahoma Sisters; Terri Hardin, of Sand Springs, Oklahoma Robin Kipping and husband Rick, of Mesa, Arizona Tim was preceded in death by his parents. A celebration of life will be held 11:00 a.m. Saturday, November 9, 2019, at the Akdar Shrine of Tulsa. Speakers will include Allen Tyler, Mike Tyler, Christy Rush, Joe Wakely, and Guy Hall. The family requests memorial contributions be made to the Tulsa Akdar Shrine, In honor of Tim Tyler, 2808 South Sheridan Avenue, Tulsa, Oklahoma, 74129. Arrangements and services were entrusted to Mowery Funeral Service of Owasso. www.moweryfs.com

The family of Buford J. "Tim" Tyler created this Life Tributes page to make it easy to share your memories.

Send flowers to the Tyler family.