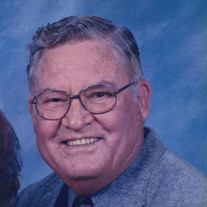 Buford Williams was born January 29, 1928, in Luxora, Mississippi, to Bobby Lee Williams and Alma Myrtle Akins Williams. He died Tuesday, February 2, 2021, in Claremore, Oklahoma, at the age of 93 years. Buford worked hard all of his life and took many self-taught lessons and night courses. He owned and operated a foundry in the early years of his life. He was a superintendent for Mr. Foster, a professor at the University of Tulsa, and studied nights at his house until Mr. Foster threw the books in the floor and told Buford he was better. When Mr. Foster passed, he left the utility company to Buford. The rest is history, as Buford laid utility lines in Tulsa until he became a developer, owning and operating Battlecreek Land Development, Incorporated. He was also a very successful rancher and drilled many oil wells. Buford enjoyed a variety of pastimes including playing pitch with his friends, D.M. Sokolosky, Dr. Ed Sokolosky, Dee Sokolosky, and Wylie Morton. He loved playing the slot machines, especially at the Hard Rock Casino. He liked spending time on the water anywhere he could throw out at line fishing. Buford helped build Freedom Church in Owasso, and was actually the first baptism in the swimming pool of his home on Highway 20. He was a faithful man of God, very kind and generous. His word and handshake were always a contract. Those he leaves behind who hold many cherished memories include: His wife; Helen One son; Larry McConaghie Five grandchildren; Ann Chris Jennifer Mandy Clinton Three great grandchildren Four brothers; Bill Williams Bob Williams Buck Williams Jim Williams Two sisters; Bonnie Ross Madie Hair Special loved ones Brian and Lou Gudenkaut, and Lexie Johnson, who have worked tirelessly to care for Buford and of course many friends who loved him dearly. He was preceded in death by his parents, son, Charles Williams, daughter, Lynn McGill, and brother, Ed Williams. Visitation will be held from 4:00 p.m. to 8:00 p.m. Thursday, February 4, 2021, at Mowery Funeral Service in Owasso. Funeral service will be held 1:30 pm. Friday, February 5, 2020, at Freedom Church in Owasso with Pastor Andrew Rankin officiating. Serving as casket bearers will be Jonathon Frick, Dustin Reudelhuber, Scott Maxwell, Phil Osterahut, Jerry Holt, and Brian Gudenkauf. Committal service and interment will follow at Fairview Cemetery in Owasso. Arrangements and services were entrusted to Mowery Funeral Service of Owasso. www.moweryfs.com

Buford Williams was born January 29, 1928, in Luxora, Mississippi, to Bobby Lee Williams and Alma Myrtle Akins Williams. He died Tuesday, February 2, 2021, in Claremore, Oklahoma, at the age of 93 years. Buford worked hard all of his life... View Obituary & Service Information

The family of Buford Williams created this Life Tributes page to make it easy to share your memories.

Send flowers to the Williams family.