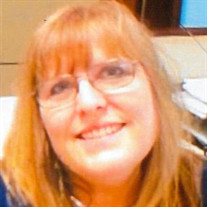 Candace Jo Reynolds Ashenfelter was born on May 5, 1953 to Roberta Joan Cothran Reynolds and Joseph Reynolds. She graduated from Henryetta High School in 1971 and attended the University of Oklahoma before enlisting in the United States Army. Candy was stationed at Fort Gordon in Augusta, Georgia and rose to the rank of Drill Instructor Sargent. She was honorably discharged in 1974 and moved to Denver, Colorado where she was employed by the Denver Metropolitan Police Department. She returned to Oklahoma and attended the OSU Institute of Technology, receiving her degree in Information Systems Management. Upon graduation she was employed by Phillips Petroleum (ConocoPhillips) as a systems analyst where she worked for the next 20 years. While working at ConocoPhillips, Candy met and married Michael Ashenfelter. They were married for ten years, giving birth to Blake Robert Ashenfelter in 1987. Retiring from ConocoPhillips, Candy was employed by Morgan Stanley as a compliance officer. Candy was the consummate caregiver, providing care to her mother Roberta until her passing in 2009. She continued to provide daily care to her son until her untimely passing. Candy’s generosity was exemplified by her unwavering commitment to help others who were less fortunate. She supported too many charities to list, giving away money that she herself needed. She volunteered at many service organizations, her favorite being the Friends of the Library in Durant, where she served as board member. Her willingness to help the homeless, the down trodden and human beings living outside the fringe of normal life was an example for others to follow. Candy was most proud of being a member of the Choctaw Nation; so much so that she moved to southeastern Oklahoma to be able to participate in tribal activities and services. Her ancestors would be glad to know that she had fully embraced her Native American heritage. Anyone encountering her for the first time would know within a few moments that she was a member of the Choctaw tribe. Candy was an avid reader, devouring books at a daily rate. She was a talented artist and lover of literature and performing arts. Additionally, she loved to attend the latest movie releases and watch old movies. Most of all she loved to reminisce about her days with her mother and son and the mystery of life’s ironies. Candy is survived by her son, Blake Robert Ashenfelter, brother and sister-in-law James and Angela Hess of Owasso, Oklahoma; nephews Tyler and Cory Hess of Liberty Mounds; aunt Lee Cothran, cousins Pam and Alger Flood, Melanie and Jim Golightly, Richard and Carole Varley. She was preceded in death by twin sister Constance Reynolds; brother John Randall Hess; and mother Roberta Joan Cothran Hess. Memorial service will be held 2:00 p.m. Monday, September 16, 2019, at the Mowery Funeral Service Chapel in Owasso. www.moweryfs.com

Candace Jo Reynolds Ashenfelter was born on May 5, 1953 to Roberta Joan Cothran Reynolds and Joseph Reynolds. She graduated from Henryetta High School in 1971 and attended the University of Oklahoma before enlisting in the United States Army.... View Obituary & Service Information

The family of Candace "Candy" Jo Ashenfelter created this Life Tributes page to make it easy to share your memories.

Candace Jo Reynolds Ashenfelter was born on May 5, 1953 to Roberta...

Send flowers to the Ashenfelter family.