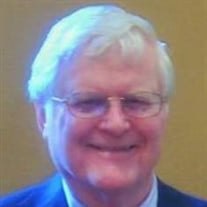 Atlanta, Georgia native, southern gentleman, and beloved husband, father, grandfather, and great-grandfather, Carl Cato Aven, III, departed this world to be with his Heavenly Father on August 4, 2019, in Owasso, Oklahoma. Carl graduated from Southern College of Pharmacy in Atlanta, Georgia, (a school of Mercer University) with a Bachelor of Science degree in March of 1959. He married the love of his life, Maxine Browder, on March 13, 1959. Carl later continued his education by attending Woodrow Wilson College of Law in Atlanta, graduating with a Juris Doctor degree in 1974. He was an avid reader and a World War II buff. He loved German chocolate fudge cake, big cats, and old westerns. He was very generous and compassionate by nature and will be sorely missed. He was a devout Christian and supporter of Loaves and Fishes as well as Wycliffe Bible Translators. Those he leaves behind who hold many cherished memories include: His wife of over 60 years; Maxine, of the home Daughters; Cynthia Dunn and husband Craig, of Franklin, Tennessee Elizabeth Kelly and husband Raymond, of Miami, Oklahoma Daughter-in-law (daughter of the heart); Terri Aven His treasured grandchildren; Kellie, Miranda, Angie, Jessie, Jacob, Zach, and Camille His great-grandchildren; Madison, Ford, Cassel, and Everly He was preceded in death by his parents, his brother, Michael Aven, and his son, Carl Cato Aven IV. Funeral service will be held 2:00 p.m. Wednesday, August 7, 2019, at Healing Grace Church, 4818 East 80th Street, Tulsa, Oklahoma, 74136. Arrangements were entrusted to Mowery Funeral Service of Owasso. www.moweryfs.com

The family of Carl Cato Aven III created this Life Tributes page to make it easy to share your memories.

Send flowers to the Aven family.