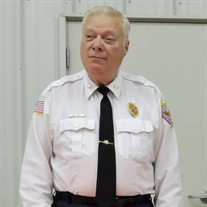 Carl Daggett Smith II was born on September 23, 1945 in Waltham, Massachusetts to Carl Daggett Smith and Florence Harriett (Coburn) Smith. He died on Saturday, January 9, 2021 in Owasso, Oklahoma at the age of 75 years. Carl was raised and educated in Lincoln, Massachusetts and graduated from Lincoln-Sudbury High School, Class of 1963. He then studied to be an electrician after high school where he paid his own way through school. Carl enlisted in the United States Navy, where he served as an Aviation Electronics Technician, 3rd class and as a firefighter on the USS Forrestal. While in the Navy, he met and married Imogene “Jeannie” (Young) Smith on March 23, 1969 at the Naval Air Technical Training Center base chapel in Glynco, Georgia. He moved to Tulsa, Oklahoma in 1974 and spent most of his working life as an officer with the Tulsa Police Department for more than 30 years and as a volunteer firefighter and Chief with the Limestone Fire Protection District in Rogers County for 40 years. Carl was an active member of the Model T Ford Club of Tulsa, Lifetime NRA, American Legion, Sons of the American Revolution, Sons of Union Veterans, and the Military Order of the Loyal Legion of the United States. In his spare time, he enjoyed a variety of past times such as historical weaponry, American History, Civil War History, Family Genealogy, and Antique Cars. Those he leaves behind who hold many cherished memories include: His wife of 51 years; Jeannie Smith 3 Children; Jennifer Downs Tammy Goode and husband Robert Edward Smith and wife Laura 9 Grandchildren; Dylan, Misty, Sarah, Isaac, Joseph, Anna, Mina, Charles, and Evelyn Sister; Cynthia Pickard and husband Bud Brother; Steven Smith and wife Karen He was Preceded in death by his parents, Carl and Florence. There will be a private family service at First Baptist Church in Owasso. The service will be able to be viewed via live stream on the church’s website, www.fbcowasso.org, on Tuesday, January 19, 2021 at 1:00 p.m. In lieu of flowers, the family request donations be made in Carl’s memory to Oklahoma Firefighters Burn Camp, P.O. Box 287, Owasso, Oklahoma 74055. Arrangements and services were entrusted to Mowery Funeral Service.

Carl Daggett Smith II was born on September 23, 1945 in Waltham, Massachusetts to Carl Daggett Smith and Florence Harriett (Coburn) Smith. He died on Saturday, January 9, 2021 in Owasso, Oklahoma at the age of 75 years. Carl was raised and educated... View Obituary & Service Information

The family of Carl Daggett Smith II created this Life Tributes page to make it easy to share your memories.