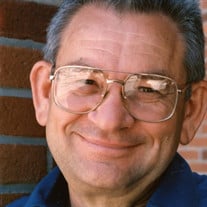 Carter Temple Bates, Jr., was born November 25, 1927, in Okmulgee, Oklahoma, to Carter Temple and Grace Laverne Vandergriff Bates. He died Friday, May 7, 2021, in Broken Arrow, Oklahoma, at the age of 93 years. Carter was reared and educated in the small community west of Okmulgee in Nuyaka, Oklahoma, and was a graduate of Nuyaka High School. He continued his education attending drafting school and worked with S.H. Kress and Company in Okmulgee. He was a veteran of the armed forces having served his country honorably with the United States Navy during the Korean War. After his honorable discharge in January of 1956, he returned to work with Meadowgold Milk Company in Tulsa. He later began a long career with American Airlines as an accountant. He enjoyed a variety of pastimes including tinkering around in his garage and spending time woodworking. He especially enjoyed square dancing and was involved with several square-dancing clubs including Buttons and Bows, Boot and Slipper, Do-Si-Do, and Double Ring. Those he leaves behind who hold many cherished memories include: His wife; Virginia Son; Michael Bates Stepchildren; Cheryl Laflin, Lisa Ziriax, Holly Nester, and James Todd 11 grandchildren Eight great grandchildren He was preceded in death by his father, Carter, his mother Grace, stepfather, Jack Gibbons, and first wife, Wilma Bates. Memorial service will be held 10:00 a.m. Wednesday, May 12, 2021, at Riverview Baptist Church in Bixby with Pastor Andy Jobe officiating. Private family disposition will be held at a later date. Arrangements and services were entrusted to Mowery Funeral Service of Owasso. www.moweryfs.com

Carter Temple Bates, Jr., was born November 25, 1927, in Okmulgee, Oklahoma, to Carter Temple and Grace Laverne Vandergriff Bates. He died Friday, May 7, 2021, in Broken Arrow, Oklahoma, at the age of 93 years. Carter was reared and educated... View Obituary & Service Information

The family of Carter Temple Bates Jr created this Life Tributes page to make it easy to share your memories.

Send flowers to the Bates family.