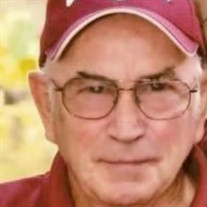 Charles T. Blaikie, 80, entered into his heavenly home Thursday, January 7, 2021. Visitation will be held from 4:00 p.m. to 8:00 p.m. Wednesday, January 13, 2021, at Mowery Funeral Service of Owasso. The Celebration of Life Service will be held 2:00 Thursday, January 14, 2021, at the Collinsville Free Will Baptist Church with Pastor Leonard Pirtle and Pastor Adam Yandell officiating. Charles was preceded in death by his mother Crystal, and father Robert Blaikie, first wife Maria Blaikie, love of his live of 53 years, Bonnie Jo Blaikie, sister, Francis, brothers Elmer and Harvey, as well as one grandson, Joey Woodridge, and two great grandsons, Jaxson Harper and Owen Fluckiger. He is survived by eight children, Connie Ellington (Rick) of Joplin, Missouri, Debbie Wooldridge (Leland) of Galena, Kansas, Terry Harper (Jeannie), of Owasso, Oklahoma, Teresa Blaylock (Gary), of Tuscaloosa, Alabama, Kathy Millhauser, of Wichita, Kansas, Tana Bray (Robert), of Norman, Oklahoma, Teresa England (Richard), of Miami, Oklahoma, and Kimberly Brown (Roger), of Fayetteville, Arkansas. He is survived by three sisters, Liz, Linda, and Iva Jean. He is also survived by 27 grandchildren, 48 great grandchildren, and 12 great great grandchildren. Charles Blaikie was the middle of seven siblings born in Gentry, Arkansas. He joined the National Guard in 1958 and went on to join the United States Marine Corp in 1960 serving seven years, honorably discharged in 1967. He met and married his lovely wife Bonnie Jo in 1967, then moved the family to Wichita, Kansas, where he worked for Beech/Cessna Aircraft Company. Upon returning to Oklahoma, Charles worked for a total of 31 years in the meat department at Safeway, McCartney Foods, and homeland, retiring as meat department manager in 2002. Charles was well known in the hunting community as a deer processor. He really enjoyed the camaraderie of his many customers. He was a faithful member and usher of Rejoice Church for 40 years and then joined Collinsville Free Will Baptist Church in 2019. For many years, Charles and his wife Bonnie volunteered at the food program “Standing In The Gap”. Charles and Bonnie enjoyed camping and attending Bluegrass Festivals and enjoyed meeting new people who shared their love of Bluegrass music. His favorite song was “Don’t Be Angry” sung by Stonewall Jackson. Charles loved to play cards (pitch) with the family members and his grandson Chase always wanted to be his partner because Grandpa Charles was the best player. He worked hard on his garden each year and everyone enjoyed the fruit of his labors. Charles was devoted to his sister, Liz, and they often talked at 9:00 a.m. each day of their mutual enjoyment of John Wayne and western movies, family, etc. Each year Bonnie and Charles would travel to Gentry, Arkansas, on Memorial Day weekend and decorate the graves of family. He never missed a year. We will miss his skillful hands carving the meat for our large family meals, his prayers of gratitude, and his laughter. He was a dependable steward of God’s bounty and we will miss him. His favorite Bible verse was Philippians 4:13, “I can do all things through Christ who strengthens me”. Serving as pall bearers will be Phillip Blazer, Adam Bray, Anthony Keener, Charles Ensign, Brian Ellington, Derek Price, Briar Henry, and Landon Henry. Honorary pall bearers will be Rick Jr., Shannon, Judy, Diana, Joey, Nick, Brandy, Destry, Tonya, Kasey, Christina, Rachelle, Heather, Holly, Josh, TJ, Justin, Jeromy and Koby. The family requests memorial contributions be made to the Cystic Fibrosis Foundation, 4550 Montgomery Avenue, Suite 1100, Bethesda, Maryland, in memory of his grandson, Joey Wooldridge. Arrangements and services were entrusted to Mowery Funeral Service of Owasso. www.moweryfs.com

Charles T. Blaikie, 80, entered into his heavenly home Thursday, January 7, 2021. Visitation will be held from 4:00 p.m. to 8:00 p.m. Wednesday, January 13, 2021, at Mowery Funeral Service of Owasso. The Celebration of Life Service will be... View Obituary & Service Information

The family of Charles Truman Blaikie created this Life Tributes page to make it easy to share your memories.

Send flowers to the Blaikie family.