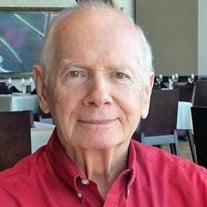 Charles Richard “Chuck” Locker was born on June 18, 1933 in Cleveland, Ohio to Emil Joseph Locker and Mary Ellen (Borchert) Locker. He died on Saturday, January 16, 2021 at his home in Owasso, Oklahoma at the age of 87 years. Chuck was raised and educated in Cleveland and graduated with the Cleveland Heights High School Class of 1952. After high school he attended classes at John Carroll University, Kent State University, and Memphis State University. Chuck was married on December 6, 1954 in Lebanon, Virginia to Phyllis J. (Fridley) Locker. He was drafted into the United States Army where he served his country honorably. Chuck worked in the fertilizer industry, starting as a chemist in the lab, working his way up to a Purchasing Agent, then to a Product Manager for Agrico, and completing his long career as a Consultant for Bentrei. In his younger years he enjoyed repairing and maintaining cars with his brothers and cousin, autocross racing and building and flying model airplanes. In his later years Chuck enjoyed jigsaw puzzles, sudoku, playing games, woodworking, and playing the slot machines at the Hard Rock Casino, but most of all he loved spending time with his children and grandchildren. Those he leaves behind who hold many cherished memories include: 5 Children; Holly Zellers and husband Bill Laurie Locker Chuck Locker and wife Sarah Andy Locker and wife Kathy Chris Locker and wife Christy 3 Grandchildren; Emily, Marissa, and Afton 2 Sisters; Carol Smith Cathy Bontempo and husband Jim Brother; Ed Locker and wife Liz He was Preceded in death by his parents, Emil and Mary Ellen, 3 brothers, Emil, Tom and Rolland, and his wife, Phyllis. The family requests in lieu of flowers, donations be made to the American Kidney Fund at https://www.kidneyfund.org

The family of Charles "Chuck" Richard Locker created this Life Tributes page to make it easy to share your memories.

Send flowers to the Locker family.