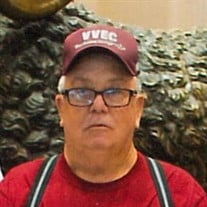 Charles Fritts was born December 15, 1941, in Owasso, Oklahoma, to Jack and Mable Weatherford Fritts. He died Sunday, April 19, 2020, in Tulsa, Oklahoma, at the age of 78 years. Charles was a lifelong resident of Owasso and lived most of his life in his childhood home built by his father. He was the middle of six children. Charles completed his secondary education in Owasso and graduated with the Owasso High School Class of 1960. During school he was active with the Owasso Future Farmers of America. He was drafted into the United States Army where he served his country honorably during the Vietnam War. After returning home he lived on the farm and worked as a welder with Slagle Manufacturing in Tulsa. He later worked at Energy Transfer for many years until his retirement. He was married August 27, 1976, at the First Baptist Church of Owasso to Sarah Woodside. They would spend 41 years of marriage together before her death on June 24, 2018. Charles enjoyed a variety of pastimes including working in his garden raising vegetables, which he shared with his family and friends. In his younger years, he enjoyed hunting and fishing with his brothers, especially his favorite fishing spot at Lake Hudson. However, it was known to everyone that Charles’ passion was Owasso Ram sports. Whether it was football, basketball, or baseball, he was always at the field or court, and usually early before game time. He would usually show up an hour early before baseball games to rake the backstop, pitcher’s mound, or secure his same seat. He followed the Owasso teams even when they traveled no matter how far it was out of town. He was always there to cheer on his Rams, or maybe to bench quarterback and make sure the referees or umpires were made aware when they made a bad call. He was a #1 Ram Fan for life. Rick Dossett said of him, “He was a fixture, a friend, and we were his family”. He was honored by Owasso Baseball coaches Larry Turner and Steve Holleman to receive a 3-peat State Championship ring when the Owasso Rams took state in 2009. Charles exercised his Uncle rights of teasing and name calling the nieces and nephews. If he teased you, that meant he liked you. This quiet, opinionated brother, uncle, and Ram fan will truly be missed. Those he leaves behind who hold many cherished memories include: Brother; George Fritts and wife Susan, of Owasso Sister-in-law; JoAnn Fritts, of Owasso Three nephews; Tommy Fritts and wife Marjon, of Collinsville Dewayne Jacobs, of Eufaula, Oklahoma Shawn Fritts, of Owasso Four nieces; Angela Jacobs, of Springfield, Missouri Regina Jones and husband Darryl, of Owasso Renea Simmons, of Owasso Melissa Jacks and husband Tommy, of Owasso And a host of nieces, nephews, and other relatives and friends. He was preceded in death by his parents, his wife Sarah, three brothers, John, Orvil, and Bill, one sister, Ida Mae Jacobs, two nieces, Sharen and Karen, and two nephews, Kevin, and Nathan. Visitation will be held from 4:00 p.m. to 8:00 p.m. Wednesday, April 22, 2020, at Mowery Funeral Service in Owasso. A private graveside service will be held with Pastor Leonard Pirtle officiating. He will be laid to rest at Fairview Cemetery in Owasso. The family requests memorial contributions be made to Owasso Baseball, P.O. Box 1011, Owasso, Oklahoma, 74055. Arrangements and services were entrusted to Mowery Funeral Service of Owasso. www.moweryfs.com

Charles Fritts was born December 15, 1941, in Owasso, Oklahoma, to Jack and Mable Weatherford Fritts. He died Sunday, April 19, 2020, in Tulsa, Oklahoma, at the age of 78 years. Charles was a lifelong resident of Owasso and lived most of his... View Obituary & Service Information

The family of Charles Fritts created this Life Tributes page to make it easy to share your memories.

Send flowers to the Fritts family.