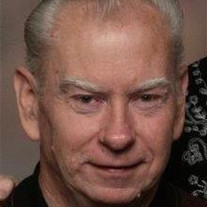 Charles David Ralph was born November 7, 1946, in Henryetta, Oklahoma, to Ovid Elwood and Cleo Arine Thomason Ralph. He died Monday, May 13, 2019, in Tulsa, Oklahoma, at the age of 72 years. Charles completed his secondary education in Bartlesville, Oklahoma, and graduated with the Bartlesville College High School Class of 1965. During his teenage years in Bartlesville he worked for the Examiner Enterprise and Safeway Grocery. He was married May 7, 1966, in Bartlesville to Joyce Adams. Charles was a veteran of the armed forces having served his country honorably with the United States Air Force as a jet engine mechanic during the Vietnam War. After returning stateside from his military service he joined the full time Air National Guard in the jet engine shop. Upon retirement from the Air National Guard he became an aviation maintenance instructor with Tulsa Technology Center at the Riverside Campus. He and Joyce were members of Life Church in Owasso. Charles enjoyed a variety of pastimes, especially collecting and working on vintage cars. He also was an avid reader of hot rod magazines. Those he leaves behind who hold many cherished memories include: Joyce his wife of over 53 years Son; Christopher David Ralph, of Owasso, Oklahoma Daughter; Rebecca Ann Bacchetti and her husband Matteo, of Montone, Italy Grandchildren; Brandon, Preston, and Zachary Ralph Isabella and Charlet Bacchetti He was preceded in death by his parents. Visitation will be held from 4:00 p.m. to 8:00 p.m. Friday, May 17, 2019, at Mowery Funeral Service in Owasso. Funeral service will be held 1:00 p.m. Saturday, May 18, 2019, at the Mowery Funeral Service Chapel. Committal service and interment will be held at the Oglesby Cemetery in Oglesby, Oklahoma. Arrangements and services were entrusted to Mowery Funeral Service of Owasso. www.moweryfs.com

Charles David Ralph was born November 7, 1946, in Henryetta, Oklahoma, to Ovid Elwood and Cleo Arine Thomason Ralph. He died Monday, May 13, 2019, in Tulsa, Oklahoma, at the age of 72 years. Charles completed his secondary education in Bartlesville,... View Obituary & Service Information

The family of Charles David Ralph created this Life Tributes page to make it easy to share your memories.

Send flowers to the Ralph family.