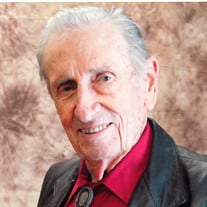 Charles William Smith was born May 28, 1931, in Parthenon, Arkansas, to Arvil Andrew “Darb” Smith and Maude Alma McArtor. He died Monday, February 24, 2020, in Claremore, Oklahoma, at the age of 88 years. Charles completed his secondary education in Clarkesville, Arkansas, and graduated with the Clarkesville High School Class of 1949. He was a veteran of the armed forces having served his country honorably with the United States Army. Charles was married November 12, 1950, in Arkansas City, Kansas, to Dorothy White. They had made their home in Owasso, Oklahoma, since 1966. He worked as an aircraft A & P mechanic and spent many years on a field service team performing major overhauls and updating avionics equipment on military aircraft. Those years brought many adventures for he and Dorothy as they traveled all around the United States spending time in every state. In 1966, he and Dorothy settled in the small community of Owasso, Oklahoma, at which time he began his 25-year career with American Airlines in Tulsa before retiring as a crew chief. He was a faithful member of the Free Will Baptist Church, most recently Collinsville Free Will Baptist Church. Over the years he served in various positions including Junior boys Sunday school teacher, bus ministry, church greeter, and several church boards. Charles enjoyed a variety of pastimes including gospel and bluegrass music. He and Dorothy played in a bluegrass band for many years performing at bluegrass shows, nursing homes, or just jamming with anyone who wanted to play. He also enjoyed antique and classic cars, and was a member of the Model A Ford Club. He spent many hours in his shop restoring model A’s and classic Mustangs. Above all, he loved his family and enjoyed spending time with his children, grandchildren, and his many great grandchildren. Those he leaves behind who hold many cherished memories include: His wife of over 69 years; Dorothy, of the home Children; Kevin Smith and wife Debi, of Fort Worth, Texas Keith Smith and wife Diane, of North Richland Hills, Texas Grandchildren; Baron “B.J.” Smith and wife Morgan, of Fort Worth, Texas Tristan Smith Polak and husband Brian, of Tahlequah, Oklahoma Devin Smith and wife Bekah, of Tucson, Arizona Taylor Smith, of North Richland Hills, Texas Michael Smith, of Norman, Oklahoma Great grandchildren; Finn Smith, Juniper Smith, and Aaro Smith, all of Fort Worth, Texas Corbin Smith and Ember Smith, both of Tucson, Arizona Sister; Janiece Armor and husband Ted, of Green Forest, Arkansas He was preceded in death by his parents, and infant son, Michael Alan Smith Visitation will be held from 4:00 p.m. to 8:00 p.m. Friday, February 28, 2020, at Mowery Funeral Service in Owasso. Funeral service will be held 1:30 p.m. Saturday, February 29, 2020, at the Collinsville Free Will Baptist Church in Collinsville, Oklahoma, with Pastor Herman Wood and Pastor Leonard Pirtle officiating. Committal service and interment will follow at Riverview Cemetery in Arkansas City, Kansas. The family requests memorial contributions be made to the John 3:16 Mission, 575 North 39th West Avenue, Tulsa, Oklahoma, 74127. Arrangements and services were entrusted to Mowery Funeral Service of Owasso. www.moweryfs.com

Customized sympathy cards. Mailed for you.