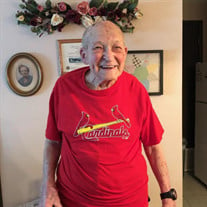 Charles Andrew Ward was born in Shreveport, Bossier Parish, Louisiana on August 21, 1926. He died on November 27, 2020, after contracting COVID-19 while a resident of a skilled nursing facility in Owasso, Oklahoma. Charles was the third of four children of Roy Edwin Ward and Alva Blanche Craighead Ward. During the Great Depression of 1930, Roy E. Ward left for California to look for work, and never returned to the family. Charles, his mother, and siblings moved to Mount Lebanon, Louisiana, to live with his maternal grandparents, David Shelby Craighead and Sarah Ella Crossland Craighead. Charles’s brother Roy, 10 years his senior, played a large role in raising him, as did “Papa” Craighead. Charles attended school in Gibsland, Louisiana, graduating from high school in 1944. He then joined his mother and sisters in Tulsa, Oklahoma, where they had moved for work. Brother Roy was serving in the U. S. Navy. Shortly after his eighteenth birthday, Charles received what he liked to describe with a wink as “a cordial letter from President Roosevelt, inviting him to join the Army.” After basic training in Arkansas, Charles served in World War II from October 17, 1944 until November 16, 1945, including service in the Battle of Okinawa. His medals and decorations include the Bronze Star. From November 1945 to January, 1946, he served in the Military Police in Korea. After military service, Charles returned to Tulsa where he attended White City Baptist Church. There he met Norma Lee Watts; they were married in 1952. They had one daughter, Brenda. The Wards were among the founding members of Belview Baptist Church in Tulsa. Norma Lee was an employee of what was then Spartan School of Aeronautics, where she worked for 48 years. In 1963, the Wards moved to Owasso, Oklahoma, where they were long-time members of Bethel Baptist Church. Serving as Sunday School teacher and deacon, Charles also sang tenor in the choir. He was later the senior citizens’ bus driver. Charles worked for many years as a diesel mechanic for International Harvester, Inc., before he began his career as a long-haul truck driver, working for H. J. Jeffries and Coweta Trucking Company, among others. He loved boring his daughter with what must have been thousands of photos of industrial construction components and the materials he hauled, and of any “smiley face” sign he encountered as he traversed the country. Other interests included baseball, specifically the St. Louis Cardinals, the newspaper comics, especially Peanuts, and country music. For many years Charles was an avid vegetable gardener. He collected old cameras and flashlights. He played softball and enjoyed bowling and snow skiing. Although his mechanical expertise was in diesel trucks, he was frequently pressed into service as the household auto mechanic, with his daughter serving as assistant. One such episode found the garage floor littered with car parts and the mechanic smudged with grease. After toiling for several hours to put the car back together, he wiped his hands on a shop towel and said, “Whew.” The assistant pointed to a part left on the floor and said, “What about this, Dad?” Charles calmly stowed it behind some junk in the garage, and turning to the assistant, said, “Don’t tell your mother.” Charles Ward was preceded in death by Norma Lee, his wife of 64 years. Also preceding him in death were his brother and sister-in-law Roy and Patricia Doyle Ward, sisters and brothers-in-law Robert and Kathryn Ward Francis and William and Dorothy Ward Henry, brother-in-law Wayne Eldon Watts, and sister-in-law Mary Greenwell Watts. Nieces Camille Francis and Dixie Francis Wright (Wayne) also preceded him in death. He is survived by his daughter, Brenda J. Ward of Kansas City, Missouri. Also surviving are sister-in-law Opal Stone Watts, brother-in-law Dale Watts, nieces Barbara Ward Hinds, Beverly Ward Jones, Patricia Ward Bosak (Steve), Jeanne Henry, Monica Watts Whiteley (Jason), and Melody Watts Fuller (Alex). Also surviving are nephews Scott Francis (Jackie), Steve Henry (Linda), Warren Henry (Stephanie), Don Watts (Jewel), Ron Watts (Diana), Jason Watts (Nicole), and Matthew Watts (Tara), multiple great-nieces and great-nephews, and several first cousins. The COVID-19 pandemic prohibits the safe gathering of family and friends at this time. The family plans a memorial service for some later date. For those wishing to commemorate Charles, the family suggests memorial donations to the National WW II Museum in New Orleans (www.nationalww2museum.org), Cura-HPC, Hospice & Palliative Care (www.cura-hpc.com), or Bethel Baptist Church (www.bethelowasso.org). Mowery Funeral Service, Owasso, Oklahoma Interment at Floral Haven Memorial Gardens, Broken Arrow, Oklahoma

Charles Andrew Ward was born in Shreveport, Bossier Parish, Louisiana on August 21, 1926. He died on November 27, 2020, after contracting COVID-19 while a resident of a skilled nursing facility in Owasso, Oklahoma. Charles was the third of four... View Obituary & Service Information

The family of Charles Andrew Ward created this Life Tributes page to make it easy to share your memories.

Send flowers to the Ward family.