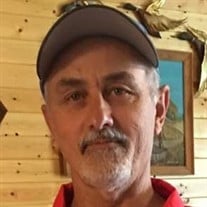 Chris Emmet Fletcher was born October 27, 1963, in Tulsa, Oklahoma, to Loren David and Mary Lee Barnett Fletcher. He died Monday, November 11, 2019, in Tulsa, Oklahoma, at the age of 56 years. Chris completed his education in Tulsa, Oklahoma, and spent most of his working life as a self-employed construction contractor. He was a very versatile handyman and Jack of all trades who could build or fix almost anything. He was married November 1, 1979, in Tulsa to Cindy Ewton. They had made their home together in Oologah, Oklahoma. Chris loved the outdoors and when he wasn’t working he enjoyed spending time fishing and hunting. He enjoyed an occasional trip to the casino, especially for the good food. He was a passionate bowler and was active in the men’s league at The Lanes at Coffee Creek in Owasso. He was an avid St. Louis Cardinal baseball fan and was fond of watching their games. Those he leaves behind who hold many cherished memories include: His wife of over 40 years; Cindy Son and daughter-in-law; Chris and Jess Brothers; Bill Fletcher, Patrick Fletcher, Paxton Fletcher, Alfred Fletcher, and Alvin Fletcher Sister; Marvella Harjo Mother; Mary Barnett And his two granddogs; Zoe and Bandit He was preceded in death by his father and one brother, Lee Fletcher. Visitation will be held from 4:00 p.m. to 8:00 p.m. Thursday, November 14, 2019, at Mowery Funeral Service in Owasso. Funeral service will be held 10:00 a.m. Friday, November 15, 2019 at First Baptist Church of Owasso with Mike Baskett and Chris Fletcher, Jr., officiating. Serving as casket bearers will be Josh Eastom, A.J. Fletcher, Alvin Fletcher, Patrick Fletcher, Austin Lang, and Gary Martin. Committal service and interment will follow at Wann Cemetery in Oologah, Oklahoma. The family requests memorial contributions be made to James Mission at www.jamesmission.org. Arrangements and services were entrusted to Mowery Funeral Service of Owasso. www.moweryfs.com

The family of Chris Emmet Fletcher created this Life Tributes page to make it easy to share your memories.

Send flowers to the Fletcher family.