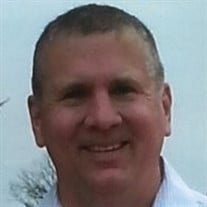 Christopher Ryan “Chris” Hobza was born March 20, 1973, in Texarkana, Texas, to Thomas Edward and Mary Ann Lorenz Hobza. He died Monday, February 11, 2019, in Owasso, Oklahoma, at the age of 45 years. Chris completed his secondary education in Idabel, Oklahoma and graduated with the Idabel High School Class of 1991. He continued his education at Oklahoma State University where he earned his bachelor’s degree in philosophy. In 1999 he earned his juris doctorate at the University of Tulsa and later his MBA at Oklahoma State University. He was married June 22, 2002, in Tulsa, Oklahoma, to Angie Adams. Chris spent most of his working life as an attorney and was associate general counsel with Hire Right in Tulsa. He was a faithful member of First Church in Owasso. He enjoyed a variety of pastimes especially all types of music and attending concerts. He also loved to travel and was the trip planner for everyone. He was an avid Oklahoma State University Cowboy fan. Those he leaves behind who hold many cherished memories include: His wife; Angie, and three children, Adam, Ryan, and Emily, all of the home Brother and sister-in-law; Scott and Becky Hobza, of Austin, Texas Nephews; Connor Hobza and Brandon Hobza Parents; Mary Ann and Tom Hobza, of Skiatook, Oklahoma And a host of extended family and friends. Funeral service will be held 3:00 Sunday, February 17, 2019, at First Church in Owasso with Pastor Matt Thomason officiating. Private family disposition will be held at a later date. The family requests memorial contributions be made to Next Generation Ministries, c/o First Church, 10100 North Garnett Road, Owasso, Oklahoma, 74055. Arrangements and services were entrusted to Mowery Funeral Service of Owasso. www.moweryfs.com

The family of Christopher Ryan Hobza created this Life Tributes page to make it easy to share your memories.

Send flowers to the Hobza family.