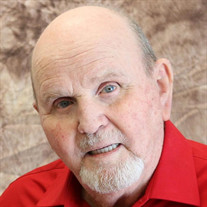 Christopher Charles McGee was born November 7, 1938, in Forestburg, Texas, to William Pryor McGee and Vera Mae Perryman McGee. He died Wednesday, January 12, 2022, in Tulsa, Oklahoma, at the age of 83 years. Chris was reared and educated in Forestburg, Texas, and graduated with the Forestburg High School Class of 1957. He was married April 18, 1958, in Bowie, Texas, to Bettie Maxine Watts. Chris spent most of his working life in the printing business as a printer. In later years, he also worked in the oil and gas industry as a pumper. Chris was a veteran of the armed forces having served his country honorably with the United States Army National Guard. He and his wife made their home in Collinsville, Oklahoma, since 2015. Chris was a faithful follower of Christ from an early age, and he served as a deacon for over forty years at the various churches he attended. He was a revered member of the Collinsville Free Will Baptist Church of Collinsville. Chris enjoyed a variety of pastimes, especially tinkering in his shop, and was a talented carpenter and small engine repairman. He also enjoyed rodeos and watching old Western movies, especially those featuring John Wayne. Chris never met a stranger; he loved to talk to people at church, at the café, at the donut shop, or at the pharmacy – all places he visited frequently. He loved his grandchildren who affectionately knew him as “Papa”. Those he leaves behind who hold many cherished memories include: His wife of over 63 years; Bettie, of the home Children; Christie Stephenson and husband Gilbert, of Lee’s Summit, Missouri Darryn McGee and wife Lisa, of Collinsville, Oklahoma Monty McGee, of Imperial, California Bettina Cannon and husband Richard, of Elizabethton, Tennessee Grandchildren; Justin McWilliams, and wife Jess of Elizabethton, Tennessee Daniel Stephenson and wife Brianna, of Lake Linden, Michigan Malleri McGee, of College Station, Texas Christine McWilliams, of Lee’s Summit, Missouri Mae McGee, and fiancé Nathan Shumaker, of Collinsville, Oklahoma Lily McGee, of Jackson, Mississippi (college residence) Liam Cannon, of Elizabethton, Tennessee Chance Rogers and husband Sloan Rogers, of Elizabethton, Tennessee Cody Cannon, of Johnson City, Tennessee Cane Cannon and wife Chelsea, of Kingsport, Tennessee 12 great grandchildren He was preceded in death by his parents and seven siblings. Visitation will be held from 4:00 p.m. to 8:00 p.m. Sunday, January 16, 2022, at Mowery Funeral Service in Owasso. Funeral service will be held 1:30 p.m. Monday, January 17, 2022, at the Collinsville Free Will Baptist Church with Pastor Adam Yandell officiating along with remarks from Pastor Mark Turrell and Pastor Billy Waller. Serving as casket bearers will be Jim Rockholt, Bob Lewis, Don Kulp, Jeff Drake, Terry Harper, and Mark Yandell. Honorary casket bearer will be Chet McMillan. Committal service and interment will follow at Ridgelawn Cemetery in Collinsville, Oklahoma. The family requests memorial contributions be made in Chris’s name to the Collinsville Free Will Baptist Church Building Fund, 15320 North Highway 169, Collinsville, Oklahoma, 74021. Arrangements and services were entrusted to Mowery Funeral Service of Owasso. www.moweryfs.com

Christopher Charles McGee was born November 7, 1938, in Forestburg, Texas, to William Pryor McGee and Vera Mae Perryman McGee. He died Wednesday, January 12, 2022, in Tulsa, Oklahoma, at the age of 83 years. Chris was reared and educated in... View Obituary & Service Information

The family of Christopher Charles McGee created this Life Tributes page to make it easy to share your memories.

Send flowers to the McGee family.