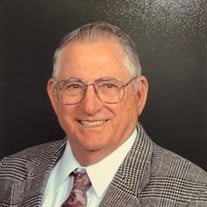 Claude Edward Stiles was born on March 4, 1930 in Oklahoma at the 101 Ranch near Ponca City to Jess Pike Stiles and Hazel Marie Dalton Stiles. He died on Sunday, January 3, 2021 in Tulsa, Oklahoma at the age of 90 years. He was raised and educated in Hutchinson, Kansas. Claude enlisted and served his country honorably in the United States Air Force. He was married on October 15, 1955 in Bartlesville to Elma “Jean” (Schmidt) Stiles. As a teenager, he delivered pies in Hutchinson, Kansas. As a young man Claude worked for the railroad and shoveled coal as a fireman. He drove a truck for Barlow Lumber Company in Bartlesville. He spent most of his working life as a mechanic with American Airlines in Tulsa for about 34 years. He was a faithful member of Central Baptist Church since moving to Owasso in 1971. Claude was involved with his sons as a Boy Scout leader. Claude enjoyed a variety of past times such as woodworking, traveling to the national parks, and snow skiing, but most of all he loved spending time with his grandchildren. Those he leaves behind who hold many cherished memories include: His wife; Jean Stiles 2 Sons; Rick Stiles and wife Lisa Gary Stiles and wife Judy 4 Grandchildren; Elissa Stiles Raini Stiles Dana Stiles Alexandra Waits and husband Lewis Brother; Don Stiles Sister; Ernestine Bowman He was preceded in death by his parents, Jess and Hazel, his brother, Marion Stiles, his sister, Irene (Stiles) Shank and Geraldine (Stiles) Hamm. A funeral service will be held 11:00 a.m. on Thursday, January 7, 2021 at the Mowery Funeral Service Chapel in Owasso with Pastor Kevin Laufer officiating. There will be a visitation one hour before the service. Graveside service will follow at Ethel Reece Cemetery in Barnsdall, Oklahoma. In lieu of flowers the family requests donations be made in Claude’s memory to Central Baptist Church, 9001 N. 145th E. Ave, Owasso, OK 74055. Arrangements and services were entrusted to Mowery Funeral Service.

Claude Edward Stiles was born on March 4, 1930 in Oklahoma at the 101 Ranch near Ponca City to Jess Pike Stiles and Hazel Marie Dalton Stiles. He died on Sunday, January 3, 2021 in Tulsa, Oklahoma at the age of 90 years. He was raised and educated... View Obituary & Service Information

The family of Claude Edward Stiles created this Life Tributes page to make it easy to share your memories.

Send flowers to the Stiles family.