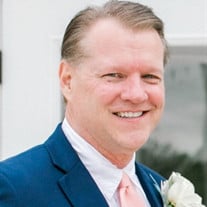 Clayton Robert Griggs was born June 25, 1965, in Tulsa, Oklahoma, to Charles Emmitt and Elizabeth Ann Griggs. He died Saturday, August 21, 2021, in Tulsa at the age of 56 years. Clayton was raised and educated in Tulsa and graduated with the Nathan Hale High School Class of 1983. He attended Oklahoma State University in Stillwater, Oklahoma, earning his Bachelors Degree in health and physical education. He was married July 23, 1988, in Owasso, Oklahoma, to the Tammy Pollard. Clayton continued his education at Andersonville Theological Seminary earning his Master’s Degree in Theology. Clayton spent most of his life in ministry including serving as youth minister for several churches in Oklahoma, then as a pastor for several congregations in Oklahoma, Arkansas, and Texas. He was currently serving Director of Missions with the Muskogee Baptist Association which was his dream job. He enjoyed many activities such as running, playing golf, and spending time with his family. He was an avid Oklahoma State Cowboys and Pittsburgh Steelers fan . Clayton was a strong man of faith who was committed to winning others to Jesus Christ. Those he leaves behind who hold many cherished memories include: His wife; Tammy Griggs Daughter and son-in-law; Haley and Hutch Anderson Mother; Elizabeth Brown and husband Phillip Father; Charles Griggs and wife Joyce Brother; Christopher Griggs Sister; Cathy Griggs He was preceded in death by his grandparents, Clyde and Lucie Cotton, Kenneth Griggs, Myrtle Griggs-Barrett, and George Barrett, niece, Addie Kelley, and nephew, Joshua Griggs. Visitation will be held from 5:00 p.m. to 8:00 p.m. Friday, August 27, 2021, at Mowery Funeral Service in Owasso. Funeral service will be held 1:00 p.m. Saturday, August 28, 2021, at Southeast Baptist Church in Muskogee, Oklahoma, with Dr. Kevin Stewart officiating. Serving as casket bearers will be Hutch Anderson, Steve Pollard, Ronnie Pollard, Kip Martin, Rodger Howie, and Casey Jones. Final resting place will be at Graceland Memorial Park Cemetery in Owasso, Oklahoma. The family requests memorial contributions be made in Clayton’s memory to Gideons International, P.O. Box 1022, Owasso, Oklahoma, 74055, Owasso Baptist Home for Children, 12700 East 76th Street North, Owasso, Oklahoma, 74055, or to a church congregation of your choice. Arrangements and services were entrusted to Mowery Funeral Service of Owasso. www.moweryfs.com

Clayton Robert Griggs was born June 25, 1965, in Tulsa, Oklahoma, to Charles Emmitt and Elizabeth Ann Griggs. He died Saturday, August 21, 2021, in Tulsa at the age of 56 years. Clayton was raised and educated in Tulsa and graduated with the... View Obituary & Service Information

The family of Clayton Robert Griggs created this Life Tributes page to make it easy to share your memories.

Send flowers to the Griggs family.