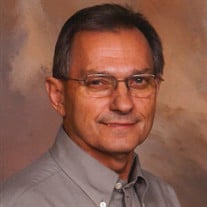 Dale Allen Kunze was born on August 8, 1945, in St. Paul, Nebraska, to Albert Ernest Kunze and Twila Irene (Weber) Kunze. He died on Saturday, September 26, 2020, in Owasso, Oklahoma, at the age of 75 years. Dale was raised and educated in St. Paul and graduated with the St. Paul High School Class of 1963. After high school he enlisted and served his country honorably in the United States Air Force. Dale was married on January 8, 1966 in St. Paul to Beverly Ann (Windolph) Kunze. He spent most of his working life as a manager of the manufacturing divisions interiors and structures with Nordam in Owasso for 39 years. Dale has been a faithful member at Faith Lutheran Church in Owasso for over 40 years. He was also active at the Owasso VFW Post #7180. Dale enjoyed a variety of past times such as remodeling his rental homes, using his handyman skills to build or fix anything, fishing, but most of all he loved spending time with his family and especially his grandchildren. Those he leaves behind who hold many cherished memories include: Wife of over 54 years; Beverly Kunze, of Owasso Son; Keith Kunze and wife Melissa, of Broken Arrow Son In Law; Bill Campbell and wife Karen, of Owasso 5 Grandchildren; Trevor Walker, of Hermitage, Tennessee Casey Kunze and wife Shaffer, of Oklahoma City Kelsey Campbell, of Owasso Lily Kunze, of Broken Arrow Jordan Peters, of Shawnee, Kansas Siblings; Kenneth Kunze and wife Darlene, of St. Paul, Nebraska Gary Kunze and wife Karen, of Vista, California Marvin Kunze and wife Sandra, of Lincoln, Nebraska Sharon White and husband David, of Doniphan, Nebraska Dan Kunze and wife Sue, of Grand Island, Nebraska Lori Kunze, of Grand Island, Nebraska He was preceded in death by his parents, Albert and Twila, 2 brothers, James and Donald, sister, Diane, and his daughter, Alisa. Funeral service will be held 11:00 a.m. on Wednesday, September 30, 2020 at Faith Lutheran Church in Owasso with Pastor Mark Neuman officiating. There will be a visitation at the church one hour prior to the service. A graveside service will follow at Graceland Memorial Park Cemetery in Owasso. In lieu of flowers the family requests donations be made in Dale’s memory to Faith Lutheran Church, 9222 N. Garnett Rd, Owasso, OK 74055 or Owasso VFW Post #7180, P.O. Box 1482, Owasso, OK 74055. Arrangements and services were entrusted to Mowery Funeral Service.

Dale Allen Kunze was born on August 8, 1945, in St. Paul, Nebraska, to Albert Ernest Kunze and Twila Irene (Weber) Kunze. He died on Saturday, September 26, 2020, in Owasso, Oklahoma, at the age of 75 years. Dale was raised and educated in St.... View Obituary & Service Information

The family of Dale Allen Kunze created this Life Tributes page to make it easy to share your memories.

Send flowers to the Kunze family.