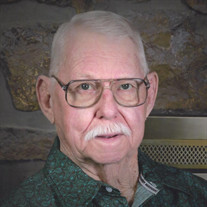 Dale Eugene Ryan was born October 21, 1935, in Albuquerque, New Mexico, to Stanley Cowan Ryan and Mary Elizabeth Redmon. He died Saturday, August 8, 2020, in Broken Arrow, Oklahoma, at the age of 84 years. Dale moved around in his younger years, graduating Hutchinson High School. He was a veteran of the armed forces having served his country honorably with the United States Navy. He was married November 2, 1957, in Silver City, New Mexico, to Dovie Ann Pritchett. Dale spent most of his working life as an electronics technician beginning with Western Electric installing relay stations, Raytheon developing the Hawk and Patriot missile systems, then with Los Alamos National Laboratory in Los Alamos, New Mexico, working on numerous Defense projects including supporting NASA shots, until his retirement. He was a member of the National Rifle Association, the North American Aerospace Rod and Gun Club, and the American Legion Grube-Hunter Broken Arrow Post #110. He enjoyed a variety of pastimes, including traveling his wife, Dovie on motorcycles. Being an avid shooter, Dale shot competitively, in muzzleloader, trap and skeet. Dale was a talented man who could look at something and having the right tool could replicate it. Dale will be remembered for his sense of humor and smile. Those he leaves behind who hold many cherished memories include: His wife of over 62 years; Dovie, of the home Daughter; Sheila Ryan and friend Denise Davis, of Broken Arrow And a host of other friends and relatives. A memorial service will be held 10:00 a.m. on Friday, September 25, 2020 at Mowery Funeral Service Chapel in Owasso. The family requests memorial contributions be made to the American Cancer Society, 4110 South 100st East Avenue, Suite #101, Tulsa, Oklahoma, 74146. Arrangements and services were entrusted to Mowery Funeral Service of Owasso. www.moweryfs.com

The family of Dale Eugene Ryan created this Life Tributes page to make it easy to share your memories.

Send flowers to the Ryan family.