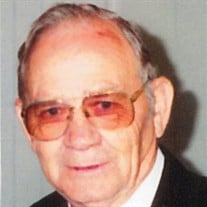 Reverend Dalton D. “Pete” Thomas was born February 20, 1927, in Bushyhead, Oklahoma, to Benjamin Harrison and Goldie Temple Lair Thomas. He with to be with his Lord and Savior Tuesday, August 7, 2018, in Tulsa, Oklahoma, at the age of 91 years. Pete was a veteran of the armed forces and served his country honorably with the United States Navy during World War II and was discharged in June of 1946. His decorations included the Asiatic Pacific Area Campaign Medal, the Philippine Liberation Medal, and the World War II Victory Medal. He was married August 8, 1947, in Tulsa, Oklahoma, to Betty Jean Mendenhall. He spent much of his working life as an electrician and was the owner of Owasso Electric. Pete was a faithful believer and minister of the gospel. He started preaching at the age of 24, pastoring several churches over the years and evangelizing early in his ministry. He pioneered several more churches. His last sermon was preached at the age of 90. Pete traveled extensively whether by motorcycle or airplane. He enjoyed being outdoors riding down dirt roads on horseback or on horse powered Harley’s and Honda Dressers, dirt bikes, three-wheelers, and four-wheelers. Pete was full of adventure and broke a horse to ride on his 90th birthday. He leaves many cherished memories with his family including: His son and daughter-in-law; Doug and Tena Thomas Grandson; Joshua Thomas, two great grandchildren He was preceded in death by his parents; his wife, Betty; grandson, Liberty Thomas; sisters, Martella, Louise, Kathleen, and Opal; and two brothers, Walt Thomas, and Joy “Hap Thomas. Visitation will be held from 1:00 p.m. to 5:00 p.m. Sunday, August 12, 2018, at Mowery Funeral Service in Owasso. Funeral service will be held 2:00 p.m. Monday, August 13, 2018, at the Mowery Funeral Service Chapel in Owasso with Reverend Leo Potts officiating. Final resting place will be at Memorial Park Cemetery in Tulsa, Oklahoma. The family requests memorial contributions be made to the charity of your choice in Pete’s name. Arrangements and services were entrusted to Mowery Funeral Service of Owasso. www.moweryfs.com

Reverend Dalton D. &#8220;Pete&#8221; Thomas was born February 20, 1927, in Bushyhead, Oklahoma, to Benjamin Harrison and Goldie Temple Lair Thomas. He with to be with his Lord and Savior Tuesday, August 7, 2018, in Tulsa, Oklahoma, at the... View Obituary & Service Information

The family of Dalton D. "Pete" Thomas created this Life Tributes page to make it easy to share your memories.

Send flowers to the Thomas family.