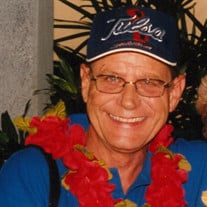 Daniel Craig Bohnsack was born September 16, 1944, in Skiatook, Oklahoma, to Clayton Robert Bohnsack and Lily May (Craig) Bohnsack. He passed from this life on Tuesday, July 16, 2019, in Owasso, Oklahoma, at the age of 74 years. Dan was raised and educated in Barnsdall, Oklahoma and graduated with the Barnsdall High School Class of 1962. He then went on to earn his bachelor’s degree in Business Administration from the University of Tulsa. After college he was drafted and served his country honorably in the United States Army. Dan was married on August 15, 1964 in Skiatook, Oklahoma to Liana Faye (Crane) Bohnsack. He spent most of his working life as a business owner, first owning Pierce Pipe and Supply in Nowata for about 20 years, and then owning Oologah Hardware for about 13 years. He was a faithful member of Skiatook Presbyterian Church for most of his life. Dan was a member of the Rotary Club and the Tulsa Golden Hurricane Club. Dan had a variety of pastimes such as attending TU football and basketball, playing tennis, fishing, RV-ing, and watching fireworks. Those he leaves behind who hold many cherished memories include: Wife; Liana Bohnsack, of Owasso Daughter; Deana Bohnsack-Crane and husband Kevin, of Owasso He was preceded in death by his parents, Clayton and Lily, and sister, Shelley. Visitation will be held from 4:00 p.m. to 8:00 p.m. Tuesday, July 23, 2019 at Mowery Funeral Service. Funeral service will be held at 10:00 a.m. Wednesday, July 23, 2019, at the Mowery Funeral Service Chapel in Owasso with Pastor Dale Nielson officiating. Graveside service and interment will follow at 1:00 p.m. at Ethel Reece Cemetery in Barnsdall, Oklahoma. In lieu of flowers the family requests donations be made in Dan’s memory to Street Cats, 6520 E. 60th, St., Tulsa, OK 74145 or Animal Aid of Tulsa, 3307 E. 15th St., Tulsa, OK, 74112. Arrangements and services were entrusted to Mowery Funeral Service of Owasso. www.moweryfs.com

Daniel Craig Bohnsack was born September 16, 1944, in Skiatook, Oklahoma, to Clayton Robert Bohnsack and Lily May (Craig) Bohnsack. He passed from this life on Tuesday, July 16, 2019, in Owasso, Oklahoma, at the age of 74 years. Dan was raised... View Obituary & Service Information

The family of Daniel Craig Bohnsack created this Life Tributes page to make it easy to share your memories.

Send flowers to the Bohnsack family.