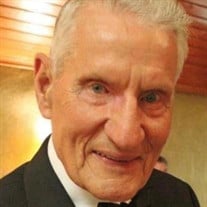 Daniel M. Gerber was born September 26, 1929, in Mead, Kansas to Leo Gerber and Katherine (Hoffman) Gerber. He died Wednesday, April 8, 2020, in Tulsa, Oklahoma at the age of 90 years. Dan was raised and educated in Danville, Kansas. He enlisted and served his country in the United States Army where he served until being honorably discharged. He was married in Wichita, Kansas on January 15, 1955 to Norma Lee (Jones) Gerber. Dan spent most of his working life as an Airplane Mechanic with American Airlines in Tulsa for over 30 years. He was a faithful member of St. Therese Catholic Church in Collinsville, Oklahoma for about 30 years until moving to St. Henry’s Catholic Church in Owasso, Oklahoma where he attended almost 20 years and had most recently attended St. Pius X Catholic Church in Tulsa. He enjoyed a variety of past times, but his greatest passion was getting his private pilot license and flying his own planes when he lived on Sandridge Airpark in Collinsville. Those he leaves behind who hold many cherished memories include: His wife of over 65 years; Norma Gerber, of Tulsa 3 Sons; Daniel Marcus Gerber, Jr., of Collinsville Gary Lee Gerber and wife Katherine, of Collinsville Phillip Wayne Gerber and wife Lisa, of Collinsville 8 Grandchildren and 8 Great Grandchildren and one more on the way 3 Sisters; Irene Metsinger Esther Huslig Joan Wood He was preceded in death by his parents, Leo and Katherine, 4 sisters, Leona, Catherine, Stella, and Pauline, and 4 brothers, Clem, Arthur, Leo, and Gerald. A graveside service will be held for immediate family at Ridgelawn Cemetery in Collinsville. Arrangements and services were entrusted to Mowery Funeral Service of Owasso.

Daniel M. Gerber was born September 26, 1929, in Mead, Kansas to Leo Gerber and Katherine (Hoffman) Gerber. He died Wednesday, April 8, 2020, in Tulsa, Oklahoma at the age of 90 years. Dan was raised and educated in Danville, Kansas. He enlisted... View Obituary & Service Information

The family of Daniel M. Gerber created this Life Tributes page to make it easy to share your memories.

Send flowers to the Gerber family.