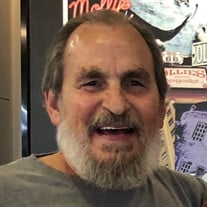 Darrell Lynn Lester was born November 28, 1949, in Norman, Oklahoma, to Leonard Marion and Neva Jean Lucas Lester. He died Saturday, December 19, 2020, in Tulsa, Oklahoma, at the age of 71 years. Darrell completed his secondary education in Norman and graduated with the Norman High School Class of 1968. He was a veteran of the United States Armed Forces having served his country honorably with the United States Army during the Vietnam War. His decorations and commendations included the Vietnam Service Medal, Vietnam Campaign Medal, Oversea Bar, Army Commendation Medal, Aircraft Crewman Badge, Expert Rifle Badge, and Sharpshooter Badge. He spent most of his working life as an assembler with General Motors. Darrell was married December 31, 1993, in Norman, Oklahoma, to Patricia Jo Solinger. They made their home in Norman before moving to Owasso, Oklahoma, in 2009. He enjoyed motorcycles and racing. He was an avid fan of NASCAR and absolutely loved watching his grandsons wrestle. He enjoyed traveling in their RV; however his greatest love was spending time with his family, especially his grandkids who affectionately knew him as “Papa”. Those he leaves behind who hold many cherished memories include: His children; Derek Lester, of Norman, Oklahoma Jason Lester and husband John, of Sacramento, California Christopher Logue and wife Kimberly, of Japan Adam Peterson, of Tulsa, Oklahoma Julie Smith-Pittman and husband Justin Pittman, of Owasso, Oklahoma Nine grandchildren; Ethan, Nicholas, Jordyn, Anthony, Landon, Hannah, Kyler, Kade, and Maverick Two sisters; Anita Pearson and husband Dan, of Texas Janice Lester, of Norman, Oklahoma Brother; Duane Lester, of Purcell, Oklahoma He was preceded in death by his parents. Funeral service was held 7:00 p.m. Tuesday evening, December 22, 2020, at the Mowery Funeral Service Chapel in Owasso with Pastor Matt Thomason officiating. Private family disposition will be held at a later date. Arrangements and services were entrusted to Mowery Funeral Service of Owasso. www.moweryfs.com

The family of Darrell Lynn Lester created this Life Tributes page to make it easy to share your memories.

Send flowers to the Lester family.