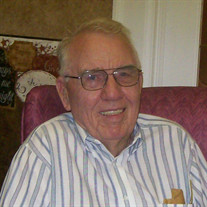 Darrell Dean Shields was born March 9, 1925 in Shidler, Oklahoma to Robert H. Shields and Zelpha Opal (Cheek) Shields. He passed from this life on Thursday, September 14, 2018, in Owasso, Oklahoma, at the age of 93 years. Darrell was raised and educated in Eunice, New Mexico and graduated with the Eunice High School Class of 1944. After High School Darrell attended classes at Eastern New Mexico University. He married Dorothy Elizabeth (Ragle) Shields at Clearfork Baptist Church near Weatherford, Texas on September 1, 1957. Darrell spent most of his working life as an Oil Field Pumper, working for Gulf Oil (later became Chevron) for 35 years. He was a faithful member and deacon at First Baptist Church in Eunice and became a member at First Baptist Church in Owasso after moving there in 2002. He enjoyed a variety of pastimes such as camping, traveling, spending time and the Glorieta Baptist Retreat in New Mexico with Dorothy, and had more recently become an avid reader. Those he leaves behind who hold many cherished memories include: His wife; Dorothy Shields, of Owasso Son; David Shields and wife Lori, of Claremore 4 Grandchildren; J.D. George, of Oologah Jeanie Carpenter and husband Jeff, of Oologah Kayla Searan and husband Frankie, of Oologah Kristal Myers, of Owasso 23 Great Grandchildren He was preceded in death by his parents, Robert and Zelpha, and his stepmother, Ruth. Visitation will be held from 4:00 p.m. to 8:00 p.m. on Tuesday, September 18, 2018 at Mowery Funeral Service. Funeral Service will be held 10:00 a.m. Wednesday, September 19, 2018 at the Aslup Chapel at the Baptist Village in Owasso. In lieu of flowers, the family requests donations be made in Darrell’s memory to the Baptist Children’s Home, 12700 E. 76th St. N., Owasso, OK 74055. Arrangements and services were entrusted to Mowery Funeral Service of Owasso.

Darrell Dean Shields was born March 9, 1925 in Shidler, Oklahoma to Robert H. Shields and Zelpha Opal (Cheek) Shields. He passed from this life on Thursday, September 14, 2018, in Owasso, Oklahoma, at the age of 93 years. Darrell was raised... View Obituary & Service Information

The family of Darrell Dean Shields created this Life Tributes page to make it easy to share your memories.

Send flowers to the Shields family.