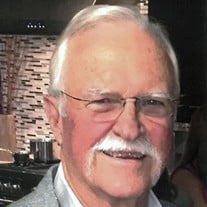 Dave Austin Duncan was born April 1, 1943, in Alpena, Michigan, to Roy Austin and Norma Faye Allison Duncan. He died Sunday, April 29, 2018, in Owasso, Oklahoma, at the age of 75 years. After graduation from school, Dave continued his education attending Cameron University in Lawton, Oklahoma, where he earned his Bachelor of Science degree. He then attended Oklahoma Wesleyan University in Bartlesville, Oklahoma, where he earned his Masters degree. Dave was married May 29, 1965, in Owasso, Oklahoma, to Janyce Kornegay. He spent most of his working life in sales and management with AT&T. Dave attended Friendship Baptist Church in Owasso. He was also a 32nd Degree Mason and a member of the Akdar Shrine. Over the years Dave and his family have been active members in many facets of the Owasso community. He enjoyed bowling, spending time fishing, and riding in the open air on his motorcycle. He also enjoyed riding and working with his horses and was an active member of the Owasso Round-Up Club. He thoroughly enjoyed the local sports, coaching his sons’ sports in their early years and helping them as they continued to grow in their athletic success. Those he leaves behind who hold many cherished memories include: His wife of over 52 years; Janyce, of the home Three sons and daughters-in-law; Kelly and Leanne Duncan, of Jackson, Tennessee Dusty and Shawn Duncan, of Claremore, Oklahoma Dallas and Tarah Duncan, of Claremore, Oklahoma Nine grandsons; Austin, Bryce, Colby, Ty, Dylan, Denton, Dalton, Koner, and Chase Three granddaughters; Ashton, Lila, and Sabra Five great grandsons; Dax, Maze, Ryland, Easton, and Kyson Sister; Cori Kaye Wheat and husband Glenn, of Marlow, Oklahoma He was preceded in death by his parents, Roy and Norma Duncan. Funeral service will be held 1:30 p.m. Friday, May 4, 2018, at Friendship Baptist Church in Owasso with Dr. Loran McAlister and Reverend Linzy Slayden officiating. Final resting place will be Fairview Cemetery in Owasso. The family requests memorial contributions be made to the Alzheimer’s Association, 2448 East 81st Street, Suite 3000, Tulsa, Oklahoma, 74137. Arrangements and services were entrusted to Mowery Funeral Service of Owasso. www.moweryfs.com

The family of Dave Austin Duncan created this Life Tributes page to make it easy to share your memories.

Send flowers to the Duncan family.