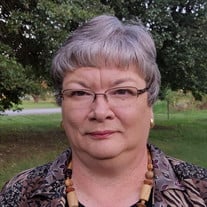 Deborah Kay “Debbie” McClain was born November 1, 1953, in Wagoner, Oklahoma, to Charles Randolph and Esther Mae Vanbrunt Moore. She died Friday, May 25, 2018, in Tulsa, Oklahoma, at the age of 64 years. Debbie completed her secondary education in Sperry, Oklahoma, and graduated with the Sperry High School Class of 1971. She later attended Tulsa Community College where she studied management. She was married November 18, 1972, in Turley, Oklahoma, to Harold James McClain. She spent most of her working life with St. John Hospital in Tulsa as an information technology manager. She was an active member of the Better Investing Chapter having served as director and President in 2014. Debbie enjoyed a variety of pastimes, especially gardening and growing flowers. She liked being outdoors and spending time fishing. She even enjoyed the occasional visit to the casino. Debbie also enjoyed spending time traveling taking bus trips and going around the country. She cherished her role as grandma and spending time with her grandkids. Those she leaves behind who hold many cherished memories include: Her husband of over 45 years; Harold, of the home Son and daughter-in-law; Jeff and Eva McClain, of Owasso Daughter-in Law; Lisa McClain, of Owasso Grandchildren; Brendan McClain and future granddaughter-in-law Kimberly Cooper, Bailey McClain, Jayden McClain and Jesse McClain, of Owasso Brother and sister-in-law; Mike and Stacy Moore, of Sacramento, California Mother; Esther Moore Hooks, of Collinsville, Oklahoma Father-in Law and Mother-in-Law; Harold and Melba McClain, of Claremore She was preceded in death by her father, Charles Moore, son, Bryan McClain, and a grandson, Brady McClain. Visitation will be held from 4:00 p.m. to 8:00 p.m. Tuesday, May 29, 2018, at Mowery Funeral Service in Owasso. Funeral service will be held 10:00 a.m. Wednesday, May 30, 2018, at the Mowery Funeral Service Chapel in Owasso with Pastor Leonard Pirtle officiating. Serving as casket bearers will be Jeffrey McClain, Jeremy Chea, Brian Hayes, and Thomas Kennedy. Honorary casket bearers are Brendan McClain, Brady McClain, Bailey McClain, Bryan McClain, and Jesse Charles McClain. Committal service and interment will follow at Sandridge Cemetery near Owasso. The family requests memorial contributions be made to the American Heart Association, 2227 East Skelly Drive, Tulsa, Oklahoma, 74105. Arrangements and services were entrusted to Mowery Funeral Service of Owasso. www.moweryfs.com

The family of Deborah K. "Debbie" McClain created this Life Tributes page to make it easy to share your memories.

Send flowers to the McClain family.