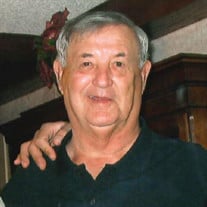 Don “Porter” DeWitt was born on January 2, 1937 in Springfield, Missouri to Bruce Tinsley DeWitt and Thriza Mae (Garbee) DeWitt. He passed from this life on Wednesday, May 12, 2021 in Tulsa, Oklahoma at the age of 84 years. Porter was raised and educated in Republic, Missouri and graduated with the Republic High School Class of 1955. After high school he earned a basketball scholarship to the University of Tulsa, where he studied Philosophy. Porter was married on May 27, 1977 in Tulsa to Brenta Bell (Randall) DeWitt. He spent most of his working life as a salesman with Nelson Electric in Tulsa for 30 years. Porter was a faithful member of Skiatook Christian Church for the past 10 years, where he gave his life to the Lord. He was a big family man and enjoyed a variety of past times such as hunting, fishing, watching the St. Louis Cardinals, Oklahoma City Thunder (not so much this year), and the Kansas City Chiefs, but more than anything he loved spending time with his family and especially his grandchildren and great grandchildren. Those he leaves behind who hold many cherished memories include: His Wife; Brenta DeWitt 3 Children; Bryan DeWitt and wife Gloria Robert DeWitt and wife Robin Alicia Somers and husband Walt 11 Grandchildren; Josh, Taryn, Caity, Maegan, Robert Austin, Jeremiah, Stephanie, Rob, Kristi, and Karlie. 19 Great Grandchildren He was preceded in death by his parents, Thirza and Bruce, 5 brothers, Bruce, Drew, Coy, Kent, and Keith, and his sister, Carol. A visitation will be held from 5:00 p.m. to 7:00 p.m. on Tuesday, May 18, 2021 at the Mowery Funeral Service Chapel with a reflection and memorial service at 6:00 p.m.

The family of Don "Porter" Dewitt created this Life Tributes page to make it easy to share your memories.

Send flowers to the Dewitt family.