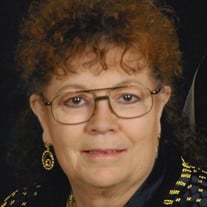 Don’l Kay Butler was born February 23, 1947, in Independence, Missouri, to Warren Wesley and Betty Cerilda Young Trotter. She died Sunday, March 7, 2021, in Collinsville, Oklahoma, at the age of 74 years. Don’l was married February 3, 1968, in Osage, Oklahoma, to David Butler. She spent most of her working life as a homemaker and caring for her family. They had made their home in Owasso, Oklahoma, since 1973. She was a woman strong in her Christian faith and had attended Bethel Baptist Church in Owasso and in recent years First Baptist Church of Owasso. She enjoyed a variety of pastimes including camping and riding four-wheeler’s. She also enjoyed painting pictures. Those she leaves behind who hold many cherished memories include: Her husband of over 54 years; David, of the home Son and daughter-in-law; David Butler, Jr., and wife Shereea, of Siloam Springs, Arkansas Daughter; Daphne Taylor, of Galveston, Texas Grandchildren: Brittan Butler, Baleigh Butler, Bode Butler, Brady Butler, Bryn Butler Porsha Kottka, and Celeste Kottka Brother; Sonny Trotter Sisters; Dorcas Winn and D’Ann Fehringer She was preceded in death by her parents, and three brothers, Joe Trotter, Lyle Trotter, and Roy Trotter. Visitation will be held from 4:00 p.m. to 8:00 p.m. Wednesday, March 10, 2021, at Mowery Funeral Service of Owasso. Funeral service will be held 10:00 a.m. Thursday, March 11, 2021, at First Baptist Church of Owasso with Pastor Chris Wall officiating. Serving as casket bearers will be Don Edwards, Ted Vancuren, Wayne Yeckley, and Jay Vance. Committal service and interment will follow at Graceland Memorial Park Cemetery in Owasso. The family requests memorial contributions be made to The Mission-FBCO, 11341 North Garnett Road, Owasso, Oklahoma, 74055. Arrangements and services were entrusted to Mowery Funeral Service of Owasso. www.moweryfs.com

The family of Don'L Kay Butler created this Life Tributes page to make it easy to share your memories.

Send flowers to the Butler family.