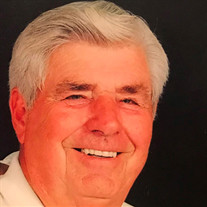 Donald Eugene Bippus was born August 10, 1936, in Galveston, Texas, to Harold Mellet Bippus Sr. and Flossie Keteria (Kettle) Bippus. He passed from this life on Saturday, July 13, 2019, in Collinsville, Oklahoma, at the age of 82 years. Donald was raised and educated in Arkadelphia, Arkansas where he attended Arkadelphia High School. Towards the end of his Senior year he enlisted and served his country honorably in the United States Air Force where he earned his GED and served for 13 years as a Jet Mechanic. Donald was married September 25, 1955 in Arkadelphia, Arkansas to Peggy (Ezell) Bippus. He was a long-time member of Bethel Baptist Church in Owasso. Donald had a variety of pastimes such as fishing and piddling in his shop. Those he leaves behind who hold many cherished memories include: Wife; Peggy Bippus, of Collinsville 2 Sons; Kenny Bippus and wife Tricia, of Broken Arrow Ronnie Bippus and wife Angie, of Collinsville 6 Grandchildren; Rodney Bippus and wife Becky, of Broken Arrow Kristi Engle and husband Kody, of Tulsa Robert Bippus, of Broken Arrow Michael Bippus and wife Lindsay, of Owasso Brian Bippus and wife Elizabeth, of Owasso Steven Bippus and wife Nicole, of Owasso 11 Great Grandchildren; Olivia, Alyssa, Grayson, Adlee, Rowan, Reagan, Brooklyn, Wade, Patrick, Cam, and Addison He was preceded in death by his parents, Harold Sr. and Flossie, and brother, Harold Jr. Visitation will be held from 4:00 p.m. to 8:00 p.m. Tuesday, July 16, 2019 at Mowery Funeral Service. Funeral service will be held at 11:00 a.m. Wednesday, July 17, 2019, at the Mowery Funeral Service Chapel in Owasso with Pastor Jerry Francisco officiating. Graveside service and interment will follow at Graceland Memorial Park Cemetery in Owasso. In lieu of flowers the family requests donations be made in Donald’s memory to Folds of Honor Foundation, 5800 North Patriot Drive, Owasso, OK 74055. Arrangements and services were entrusted to Mowery Funeral Service of Owasso. www.moweryfs.com

Donald Eugene Bippus was born August 10, 1936, in Galveston, Texas, to Harold Mellet Bippus Sr. and Flossie Keteria (Kettle) Bippus. He passed from this life on Saturday, July 13, 2019, in Collinsville, Oklahoma, at the age of 82 years. Donald... View Obituary & Service Information

The family of Donald Eugene Bippus created this Life Tributes page to make it easy to share your memories.

Send flowers to the Bippus family.