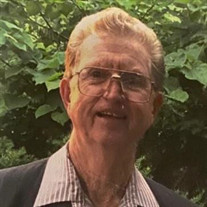 Donald Richard Ketcherside, age 82, of Owasso, Oklahoma, went to be with the Lord on Tuesday, October 1, 2019 after a long and difficult battle with Alzheimer’s. He passed in the comfort of his home with his loving wife of 62 years by his side. He was born March 22, 1937 in Tupelo, Oklahoma. He graduated high school from Atlanta, Kansas, in 1956 where he played basketball and baseball. Don and Marcia (Couch) were married on May 4, 1957 in Atlanta, Kansas. He began his career in 1957 as a tool and die specialist at Boeing in Wichita, Kansas. He then transferred with Boeing to Seattle, Washington. He later accepted a position with McDonnell Douglas in St. Louis, Missouri. He retired from McDonnell Douglas in Tulsa, Oklahoma in 1995. He was a devoted husband, beloved father, grandfather and great-grandfather, brother, and friend to many. Don and Marcia were very active in foster care, helping raise many children. Don was also very active in Prison Ministry, providing food and spending time with inmates. He is survived by his wife Marcia: sons Roger Ketcherside of Owasso, Oklahoma, Michael Ketcherside and wife Laura of Edmond, Oklahoma; Jason Ketcherside of Tulsa, Oklahoma; Daughters Kathy Loomis and her husband Rick of Edmond, Oklahoma, Kathy McGuire and husband Robert of Owasso, Oklahoma, Lisa Hoss of Broken Arrow, Oklahoma, . 15 grandchildren and 12 great-grandchildren. He is also survived by a sister, Linda and husband Dick Murrell of Chanute, Kansas; and a brother Gary Ketcherside of Chanute, Kansas. He was the fourth of nine children and preceded in death by his parents Efton and Ocie; brothers Eugene, Houston, Elvis, Leroy and Charlie; a sister Joyce; a son Larry and grandson Richard. His hobbies included hunting, fishing, watching St. Louis Cardinals games and spending time with family and friends. He was a member of the Owasso church of Christ for 39 years, where he was very active and served as a deacon. Services will be held at the Owasso church of Christ - 10510 N 129th E Ave, Owasso, Oklahoma, (918) 272-1564 on October 4, 2019 at 2:00 pm. In lieu of flowers, please feel free to donate to the Oklahoma Alzheimer’s Association – Walk to End Alzheimer’s and join Team Ketch at https://act.alz.org. There will be a very short graveside service at Graceland Memorial Park Cemetery immediately following the funeral service. Arrangements and services were entrusted to Mowery Funeral Service of Owasso. www.moweryfs.com

Donald Richard Ketcherside, age 82, of Owasso, Oklahoma, went to be with the Lord on Tuesday, October 1, 2019 after a long and difficult battle with Alzheimer&#8217;s. He passed in the comfort of his home with his loving wife of 62 years by... View Obituary & Service Information

The family of Donald Richard Ketcherside created this Life Tributes page to make it easy to share your memories.

Send flowers to the Ketcherside family.