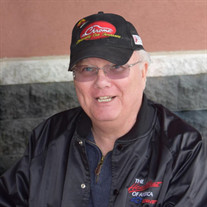 Donald Dale Turner was born May 9, 1950, in Des Moines, Iowa, to J. Karl and Ida Willodean Smith Turner. He died Thursday, November 12, 2020, in Tulsa, Oklahoma. Dale would want to say he lived 25,755 days, but the rest of us would say he was 70. Dale completed his secondary education in Enid, Oklahoma, and graduated with the Enid High School Class of 1968. He was a member of the marching band from fifth grade through college. During his high school and college years, Dale worked for local foundries. His higher education included Phillips University in Enid and a music education degree at Northwest Missouri State University in Maryville, Missouri. Dale married his high school sweetheart, Nelda K. Messenger, on May 31, 1970, in Hillsdale, Oklahoma. He was the band director at Dow City Schools and Bondurant Schools in Iowa from 1972-1980. He also worked as an independent business owner from 1976 to the present and started a Desktop Publishing company in 1984 before retiring from that in 2015. Dale was strong in his faith and was baptized at Westside Wesleyan Church in Enid. While in Iowa he was a member of Des Moines First Assembly of God, then after moving to Broken Arrow, Oklahoma, Dale attended Clearview Baptist Church. Dale loved music and was a member of the Tulsa Community Band and a charter member of T-Town Jazz Band. After his children were grown and married, Dale’s passion for cars grew even greater as he admired the craftsmanship of the many classic cars in Tulsa. Dale helped start the Tulsa Tuesday Cruise in April of 1999 which is still going strong today. He was a member of Tulsa Classic Chevy Club, serving as President and various other offices and was also a member of the Tulsa Vette Set and Klassik Kruisers. With his love for both cars and music, Dale became well-known for his playlist of 50’s and 60’s music at car events around the greater Tulsa area. Dale especially loved his family and thoroughly enjoyed his role as “Grandpa”. Those Dale leaves behind who hold many cherished memories include: His wife of over 50 years; Nelda, of Broken Arrow Daughter; Natalie Cummings and husband Dan, of Thornton, Colorado Son; Dustin Turner, of Tulsa Grandchildren; Noah and Elijah Cummings Lilah and Emma Turner Brother; Duane Turner, of Chicago, Illinois And many car enthusiasts/friends with whom Dale and Nelda shared experiences and fun. Dale was preceded in death by his parents, J Karl and Willodean Turner. Visitation will be held from 2:00 P.M. to 5:00 p.m. Sunday, November 22, 2020, at Mowery Funeral Service in Owasso, Oklahoma. Funeral service will be held at 10:30 a.m. Monday, November 23, 2020, at the Clearview Baptist Church in Broken Arrow, Oklahoma. Graveside service will be held later that afternoon at Memorial Park Cemetery in Enid, Oklahoma at 2:30 P.M. In lieu of flowers, please consider donating to Dale’s favorite organization, Happy Hands Education Center, a Christian school for children with hearing loss or communication disorders, or Gideons International, of which he was a member while living in Des Moines. Arrangements and services were entrusted to Mowery Funeral Service of Owasso. www.moweryfs.com

Donald Dale Turner was born May 9, 1950, in Des Moines, Iowa, to J. Karl and Ida Willodean Smith Turner. He died Thursday, November 12, 2020, in Tulsa, Oklahoma. Dale would want to say he lived 25,755 days, but the rest of us would say he was... View Obituary & Service Information

The family of Donald Dale Turner created this Life Tributes page to make it easy to share your memories.

Send flowers to the Turner family.