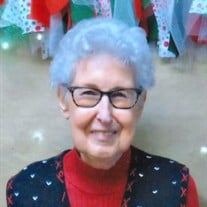 Doris Mae Potts, 90, Oologah, passed away Tuesday, August 4, 2021. She was born January 17, 1931, in Tulsa, Oklahoma to W.D. and Florence (Lemons) Linebarger. She was raised and educated in Tulsa, OK and graduated with the Central High School Class of 1950. Doris spent most of her working life as a clerk with the Roger’s County Court Clerk Office. Doris married Alvie LaRoy Lewis on November 24, 1954, in Tulsa, OK. They had three daughters and she became a stay-at-home mom. Doris and LaRoy moved from Turley to Oologah in the summer of 1969. After LaRoy’s sudden passing in 1973, Doris married Chester Penner of Oologah. They were married less than a year before a tragic accident claimed his life. On May 10, 1980 in Oologah, Doris married Vernon Potts. They were longtime faithful members of the Oologah Church of Christ. They enjoyed retirement and traveling until Vernon’s passing in 2005. Doris also liked quilting, crocheting and working in her flower beds. She was fond of finding new recipes to cook and finding new patterns to sew and crochet. Her favorite times were spent at family gatherings. Loving family members include; three children, Connie Gregory and husband Mark of Oologah Karen Rogers and husband Kevin of Castle Denise Hall and husband Leal of Oologah three stepchildren, Charlotte Hickerson and husband Jerry of Broken Arrow Jeff Potts and wife Anita of Owasso Steven Potts and wife Pamela of Owasso 28 grandchildren 30 great grandchildren She was preceded in death by her parents, W.D and Florence (Lemons) Linebarger, one sister, Mary Tibbs, one brother, Billy Linebarger and one daughter-in-law, Debbie Potts. Visitation will be held from 6:00 to 8:00 p.m. Thursday, August 5, 2021, at Mowery Funeral Service in Owasso. Funeral services are to be held Friday, August 6, 2021 at the Oologah Church of Christ. Serving as casket bearers are Jeff Potts Jr., Cody Potts, Zach Chappell, Corey Sweeney, David Hickerson and Austin Allbritton. Committal service and interment will follow at Ridgelawn Cemetery in Collinsville, Oklahoma. In lieu of flowers, the family requests memorial contributions be made to Hope Harbor, PO Box 1047, Claremore, OK 74018. Arrangements and services were entrusted to Mowery Funeral Service of Owasso. www.moweryfs.com

Doris Mae Potts, 90, Oologah, passed away Tuesday, August 4, 2021. She was born January 17, 1931, in Tulsa, Oklahoma to W.D. and Florence (Lemons) Linebarger. She was raised and educated in Tulsa, OK and graduated with the Central High School... View Obituary & Service Information

The family of Doris Mae Potts created this Life Tributes page to make it easy to share your memories.

Send flowers to the Potts family.