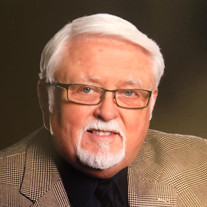 Douglas Glenn Higbee was born July 30, 1944, in Winfield, Kansas, to Glenn Archer and Helen Jean Nichols Higbee. He died Wednesday, February 5, 2020, in Tulsa, Oklahoma, at the age of 75 years. Doug was reared and educated in Kansas starting in Rock, Kansas, before moving with his family to Wichita, Kansas, where he graduated with the Wichita West High School Class of 1962. After working in several gas stations, he decided to enlist in the United States Army where he served his country honorably during the Vietnam War. He became involved in the first major troop movement to Vietnam, immediately following the Gulf of Tonkin incident in August of 1964. Doug spent the next 13 months going from Saigon to Da Nang, eventually serving in Phu Bai, Vietnam, approximately 55 kilometers below the DMZ. He was later assigned to the National Security Agency in Ft. Meade, Maryland, from 1965 to 1969. His final overseas duty was to Udorn, Thailand, at a radio research station. He married Glenda Brooks in 1966 and had two children, daughter, Traci Glynne Higbee, born in 1970 and son Christopher Edward Higbee, born in 1973. Following his discharge from the Army, Doug held several positions in the transportation industry for Roadway Express, Searle Pharmaceuticals and Sherwin Williams. During this time, he gradually put himself through college working full time and going to school at night. He earned a business degree at Richland College in Dallas, Texas, and later an Industrial Engineering degree at East Texas State University, which later became a branch of Texas A & M. In 1990, Doug moved from Atlanta, Georgia, to Coffeyville, Kansas, to accept a job as Director of Transportation for Aptus Environmental Services, a division of Westinghouse. It was there he met and married Marilyn Jane Kemp on April 26, 1991. He and Marilyn had gone back to Georgia to complete the sale of his home and during the drive home stopped in Sallisaw, Oklahoma, at a Subway Sandwich Shop. Upon returning to Coffeyville, Doug applied for a contractor’s license, hired his own sub-contractors, and purchased a Subway Franchise. After completing the Subway Training School in Bridgeport, Connecticut, he and Marilyn opened their first store in July of 1992. After much early success, they eventually opened nine Subways and three Java Dave’s Coffee Shops. Doug closed those shops in 2007 then moved to Owasso, Oklahoma. He enjoyed a variety of pastimes including playing golf. He and Marilyn enjoyed traveling together, especially taking trips on cruises. Doug was an avid reader and enjoyed tracing his ancestry which was back to Scotland and inspired his love for bagpipe music. However, one of his greatest loves was for animals, particularly dogs. Doug was loved dearly by many family and friends and will be greatly missed. Those he leaves behind who hold many cherished memories include: His wife; Marilyn, of the home Daughter; Traci Higbee, of Kansas City, Missouri Son; Chris Higbee and wife Marci, of Highlands Ranch, Colorado Stepsons; Randy Kemp, of Irving, Texas Kenny Kemp and wife Julie, of Arvada, Colorado Grandchildren; Sydney Higbee, Aiden Higbee, Logan Higbee, Carver Higbee, Fynley Higbee, Derek Kemp, Corey Kemp, Adam Kemp, and Kelsey Kemp Six great grandchildren Two sisters; Holly Higbee, of Wichita, Kansas, and Debbie Wilson, of Magnolia, Texas Funeral service will be held 5:00 p.m. Saturday, February 15, 2020, at the First United Methodist Church in Owasso with Pastor Jim Cinocca officiating. The family requests memorial contributions be made to the Folds of Honor Foundation, Department #13, Tulsa, Oklahoma, 74182, or the Owasso First United Methodist Church Mission Fund, 13800 East 106th Street North, Owasso, Oklahoma, 74055. Arrangements and services were entrusted to Mowery Funeral Service of Owasso. www.moweryfs.com

The family of Douglas Glenn Higbee created this Life Tributes page to make it easy to share your memories.

Send flowers to the Higbee family.