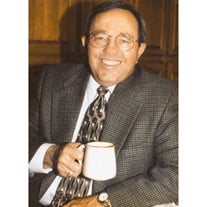 ' Dr. Archie V. Lawrence was born was born April 14, 1933, in Eudora, Arkansas, to Lovell Stotts and Ophelia (Gossett) Lawrence. He died Monday, August 15, 2016, in Tulsa, Oklahoma, at the age of 83 years. Archie completed his secondary education in Memphis, Tennessee, and was a graduate of Whitehaven High School. He continued his education at Ouachita Baptist University in Arkadelphia, Arkansas, then to Southwest Baptist Theological Seminary in Fort Worth, Texas, before earning his Doctorate at Phillips Seminary in Tulsa, Oklahoma. While working on his degree, he began his long career in the United States armed forces serving honorably with all four branches of services including the Air Force, Navy, Marine Corp, before retiring from the United States Army. He was especially proud of his service during the Korean War and the Vietnam War. Archie was married November 22, 1979, in Tulsa, Oklahoma, to Brenda Kay Wilcoxson. They had made their home in Owasso, Oklahoma, since 1979. Archie committed his life to the ministry and served many pastorates throughout Oklahoma including Presbyterian congregations in Pryor, Muskogee, McAlister, Skiatook, Miami, again in Pryor, Grove, Wagoner, and most recently Chelsea. He also served as chaplain to hospitals in Tulsa ministering to many, many families. He enjoyed a variety of pastimes, especially traveling and spending time with his family, whom he dearly loved.Loving family members include:His wife; Brenda, of the homeFour children; Grace Kerina, of Smithville, Tennessee David Lawrence and wife Julia, of Atlanta, Georgia Gregory Lawrence, of Tulsa Kristin Lawrence, of Dallas, TexasFour grandchildren; Elizabeth Minier and husband Chad, of Owasso, Oklahoma Kathryn Kelley, of Bartlesville, Oklahoma Ashton Kelley and husband Jeff, of Tulsa Liam Butler-Lawrence, of OhioFour great grandchildren; Jaxon, Makayla, Tyler, Bradon, and one due in JanuaryHe was preceded in death by his grandmother, mother, and one sister. Funeral service will be held 1:00 Friday, August 19, 2016, at the First Presbyterian Church in Tulsa with Dr. Jim Miller, Dr. Craig Coulter, and Chaplain Ron Nofziger officiating. Military graveside honors will be provided by the United States Army at Memorial Park Cemetery in Tulsa. The family requests memorial contributions be made to the Tulsa Day Center for the Homeless, 415 West Archer Street, Tulsa, Oklahoma, 74103, or Goodland Academy, 1216 Old Spring Road, Hugo, Oklahoma, 74743. Arrangements and services were entrusted to Mowery Funeral Service of Owasso.www.moweryfs.com'

The family of Dr. Archie V. Lawrence created this Life Tributes page to make it easy to share your memories.

Send flowers to the Lawrence family.