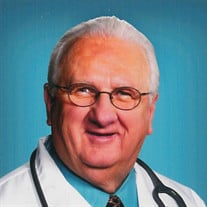 Dr. Edward Joseph Sokoloksy was born January 24, 1937, in Alderson, OK, to Dominic Tony Sokolosky and Michalina Agnes Nocek Sokolosky. He died Tuesday, May 5, 2020, in Tulsa, OK, at the age of 83 years. Ed graduated with the McAlester High School class of 1955. He continued his education at Southwestern Oklahoma State College of Pharmacy in Weatherford, OK, earning his D. Pharmacy in 1959. He worked as a pharmacist at Owasso Drug until he entered medical school at Kansas City College of Osteopathic Medicine and Surgery, earning his Doctor of Osteopathy in 1965. After an internship in Oklahoma City he returned to Owasso in July of 1966 and formed a family practice medical office, Sokolosky Clinic, which occupied the former Catholic Church on Main Street. He was married April 7, 1973, in Tulsa, OK, to Patricia Harrington. For many years throughout the 1970’s he served the Owasso Rams Varsity Football program as team physician. In 1988 he opened a second practice in Bartlesville, OK, and attended patients at both locations until his retirement in 2018. He was a longstanding member of the Oklahoma Osteopathic Association and served Owasso as a board member on the Owasso Public Golf Association, helping to establish Bailey Ranch Golf Course. Ed loved to play golf and could often be heard singing classic country songs loudly with a tone deaf voice. He enjoyed weekly card games of Pitch with his brother, D.M. Sokolosky, nephew Dee Sokolosky, and good friend Buford Williams. He was a pillar of the Owasso community and will be greatly missed by both family and friends. Those left behind to cherish his memory include his beloved wife of over 47 years, Patricia. His children Tonya Turnbull Rozell and husband Mike, of Tahlequah OK, Brad Turnbull and wife Dianna, of Collinsville, OK and Jillian Sokolosky, of Tulsa, OK. Grandchildren: Jordan Rozell, Hunter Rozell, Colton Turnbull, J. Chance Turnbull and wife Rachael and his brother, D.M. Sokolosky and wife Phyllis; as well as a host of nieces, nephews and other relatives and friends. He was preceded in death by his parents; two brothers, John Sokolosky and Victor Sokolosky, sister, Louise Idomir and sister-in-law Lois Sokolosky. A private family graveside will be held at Fairview Cemetery in Owasso, OK. The family respectfully requests memorial contributions be made in his honor to the Multiple System Atrophy Coalition at multiplesystematrophy.org/donate-now, or Folds of Honor at foldsofhonor.org. . Arrangements and services were entrusted to Mowery Funeral Service of Owasso. www.moweryfs.com

The family of Dr. Edward Joseph Sokolosky created this Life Tributes page to make it easy to share your memories.

Send flowers to the Sokolosky family.